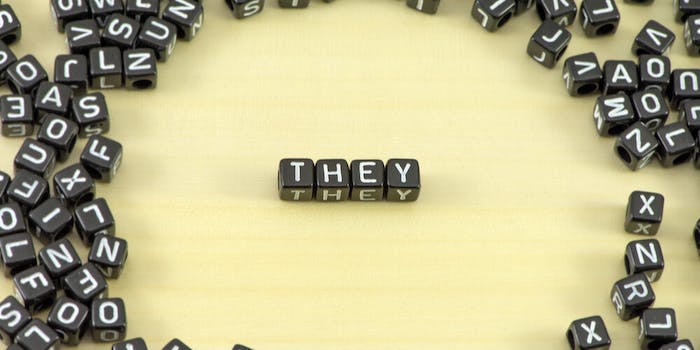 ‘They’ is Merriam-Webster’s word of the year

Nonbinary folks and their allies are celebrating the 2019 Word of the Year announcement from Merriam-Webster: they.

In September, Merriam-Webster made waves in linguistic debates by adding a new definition to the word “they,” officially recognizing its use as a singular gender-neutral pronoun. The statement came the same week that U.K. pop artist Sam Smith announced that going forward, they would be using they/them pronouns. “After a lifetime of being at war with my gender I’ve decided to embrace myself for who I am,” Smith said at the time.

Some have tried to argue that “they” is not grammatically correct for a singular gender-neutral pronoun, but Merriam-Webster says that’s not true and hasn’t been for literal centuries.

“English famously lacks a gender-neutral singular pronoun to correspond neatly with singular pronouns like everyone or someone,” the dictionary company said in its Word of the Year announcement. “As a consequence they has been used for this purpose for over 600 years.”

The addition Merriam-Webster made in September was about more than codifying this quirk of the English language. It’s also about recognizing the nonbinary usage of “they.” With celebrities like Smith owning their pronouns, and politicians like Rep. Pramila Jayapal (D-Wash.) advocating for nonbinary family members who use they/them, this usage has been, as Merriam-Webster stated, “the subject of increasing study and commentary in recent years.”

“They has also been used to refer to one person whose gender identity is nonbinary, a sense that is increasingly common in published, edited text, as well as social media and in daily personal interactions between English speakers,” Merriam-Webster said, adding that searches for “they” increased by 313% between 2018 and 2019.

Even outside of nonbinary inclusion, the singular “they” is becoming the norm over “he or she.” The American Psychological Association style guide, for example, now recommends using “they” instead of “he or she” when referencing a singular person whose gender is unknown.