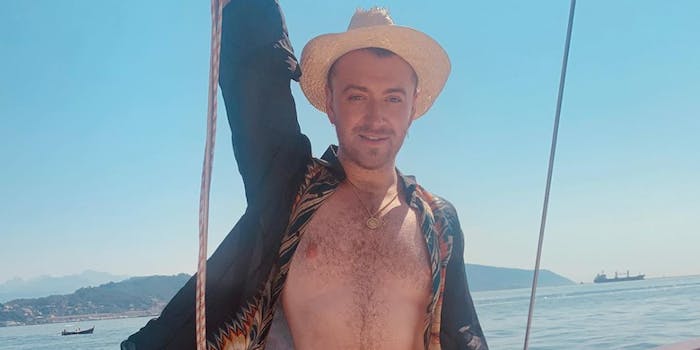 'I’ve decided to embrace myself for who I am, inside and out.'

English singer and songwriter Sam Smith announced on Twitter on Friday that they are changing their pronouns to they/them, and their fans are so proud.

Like many people in their 20s, Smith has been going through a process of self-discovery. In 2014, they came out as gay, saying their debut album was inspired by unrequited love they had for a man. In 2017, they said in an interview, “I don’t know what the title would be but I feel just as much a woman as I am man.”

While they didn’t have the language at the time to put a label to their feelings, in March, Smith elaborated on their gender identity in an interview with Jameela Jamil. “When I saw the word nonbinary, genderqueer, and I read into it, and I heard these people speaking, I was like, ‘Fuck, that is me,’” Smith said. “Nonbinary/genderqueer is that you do not identify in a gender. You are a mixture of all different things. You are your own special creation.” At that time, Smith told Jamil that many nonbinary people use they/them pronouns, but for the time being, Smith would be sticking with he/him.

On Friday, Smith tweeted an announcement about their preferred pronouns. “Today is a good day so here goes I’ve decided I am changing my pronouns to THEY/THEM,” Smith said. “After a lifetime of being at war with my gender I’ve decided to embrace myself for who I am, inside and out…”

Today is a good day so here goes. I’ve decided I am changing my pronouns to THEY/THEM ❤ after a lifetime of being at war with my gender I’ve decided to embrace myself for who I am, inside and out… pic.twitter.com/IVoLTYbAWd

“I understand there will be many mistakes and mis gendering but all I ask is you please please try,” they continued. “I hope you can see me like I see myself now. Thank you.”

The replies to Smith’s tweets were filled with fans, nonbinary and otherwise, expressing pride and thanking them for their courage.

Smith says they’re not quite ready to speak at length about what it means to be nonbinary, but they can’t wait for that day to come.