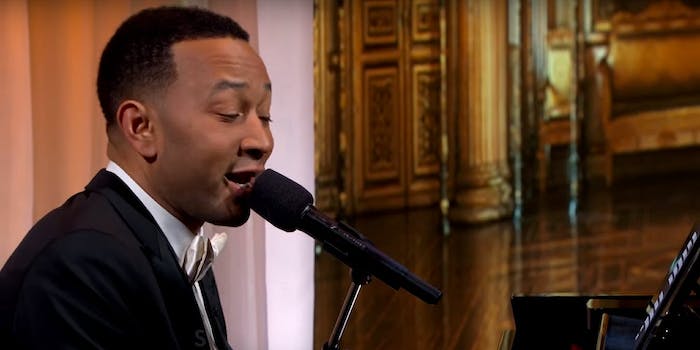 'The song was supposed to be silly.'

John Legend defended his updated, pro-consent remake of “Baby It’s Cold Outside” in an interview with the Observer this week. While many applauded Legend for his rewrite, critics accused him of ruining a classic, innocently flirtatious song. Legend has clearly heard his critics, but thinks they might be missing the point.

“The song was supposed to be silly,” Legend told the Observer. “It wasn’t supposed to be preachy at all. I never disparaged the old version […] It would be fun, and it would be newsworthy. And yeah, it was both.”

The holiday classic, originally written in the 1940s, has come under fire in recent years for what some call predatory lyrics. Critics say the lyrics describe date rape, and some radio stations have even banned the song. But defenders, including original writer Frank Loesser’ daughter, say the song was simply written in a different time.

Legend rewrote the lyrics with comedian Natashsa Rothwell and recorded the song with Kelly Clarkson for his holiday album, A Legendary Christmas. Legend has previously defended his remake as a lighthearted response in the era of #MeToo.

“I think people wanted something to be mad at, and I think, honestly, a lot of people are kind of engaged in this whole culture war,” Legend told Yahoo during a BUILD Series interview. “Some people are upset about the fact that men are being called to account in the #MeToo movement, and I think that’s a great thing that men are being called to account […] but some people don’t like that. And some people think there needs to be a backlash against this movement, and so I think they decided that our song would be the thing that they use to get into this conversation again.”

Legend has been an outspoken supporter of the #MeToo movement and advocate for victims of sexual abuse. Legend appeared in the docuseries Surviving R. Kelly and has been a longtime advocate for women’s equality, particularly in Hollywood.

“People think that because some people have lost their jobs, or have been expelled from Hollywood, like Weinstein, that we’ve gone too far. I don’t agree,” Legend told the Observer. “But people wanted the ‘Baby It’s Cold Outside’ war to be a proxy war for all that.”

You can listen to Legend and Clarkson’s rendition yourself on A Legendary Christmas, out now.