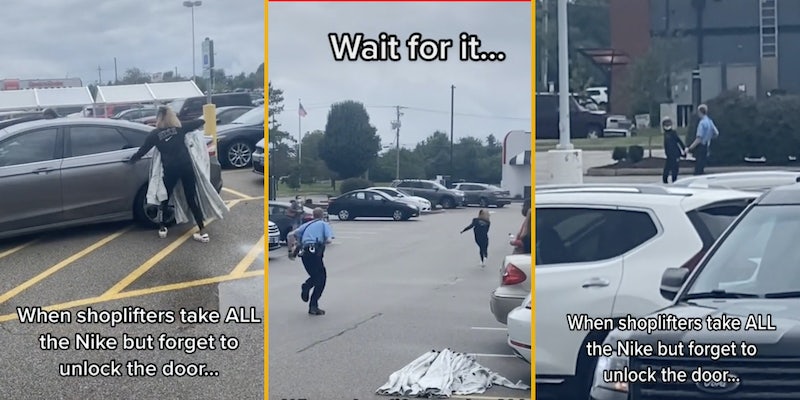 'Her crew locked her out and abandoned her when the police rolled up.'

A wildly viral TikTok video posted Sunday shows what the creator maintains is a shoplifting gone wrong, in which the getaway driver abandons the thief, leaving her to run from police arriving on the scene.

The video appears courtesy of the @faxisfax account, and has drawn an incredible 11.5 million views in less than 24 hours on the platform. The creator also posted two complimentary TikToks that have so far averaged about half a million views.

What’s more remarkable about those numbers is that the creator says it’s a repost, claiming that TikTok took down the original video.

According to the creator, the video was shot outside of a Hibbett Sports store, which based on additional info the creator provided about the location, was at 2302 Troy Road within the Edwardsville Marketplace in Illinois. The suburb is located about 20 miles from St. Louis.

The most popular video has an on-screen caption that reads, “Wait for it …” along with the observation, “When shoplifters take ALL the Nike but forget to unlock the door.”

The video shows a woman in the parking lot of a shopping mall, holding a great number of clothes on hangers, trying to get into a car through the rear driver’s side door. However, that door is locked, and while another person gets in through the front passenger’s side door, the woman with the clothes can’t get in.

The car then pulls away, leaving the woman to display an angry reaction and drop the clothes. Then, as a police officer pulls up to the scene, she breaks out into a slow run away from the scene—that causes the creator to audibly chuckle. The video cuts to the police officer managing to apprehend her in a different part of the parking lot.

One of the related videos adds the detail, by way of on-screen caption, “Her crew locked her out and abandoned her when the police rolled up,” adding a laughing emoji and the note, “They ran right by us.”

Another video, showing a short clip of the arrest, promised a story time video on the way.

Commenters generally shared in the creator’s amusement. One mused, “This her villain origin story.”

Another, noticing her footwear, observed, “She left her crocs in sport mode and got caught.”

A few people, however, expressed sympathy for the thief for being set up by her accomplices, and concluded that she would be volunteering their information to police.

The video also was cross-posted to Reddit via the r/ActualPublicFreakouts subreddit.

Update 8:15pm CT Sept. 8: A police report from the Edwardsville Police Department says that the woman was accompanied by two other female suspects, who escaped in the car. The report stated that the woman claimed she did not know the other suspects. She was arrested and charged with one count of retail theft over $300 and one count of obstructing a peace officer. At the time of her arrest, she had two active extradition warrants from Missouri, both for “stealing ($750 or more).”