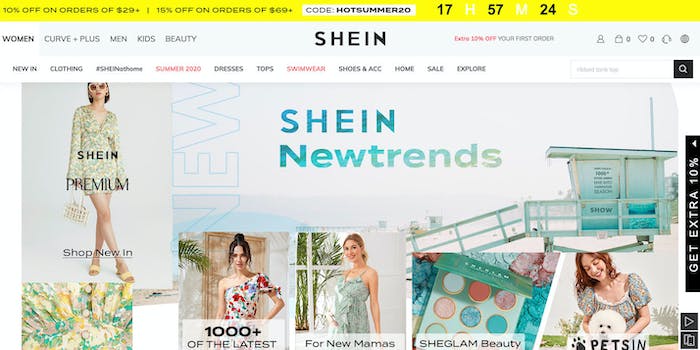 More than 2,000 people signed a petition to boycott the retailer.

Update 7:07pm CT, July 9: A Shein spokesperson told the Daly Dot it “was not selling a Nazi swastika pendant” but a Buddhist swastika necklace. “However, because we understand the two symbols can be confused, and one is highly offensive, we have removed the product from our site,” the spokesperson said in a statement. “As a multicultural and global brand, we want to apologize profusely to those who are offended, we are sensitive to these issues and want to be very clear that we in no way support or condone racial, cultural and religious prejudice or hostility.”

Just a week after facing backlash for selling religious prayer mats as decorations, online clothing store Shein is under fire for selling a necklace with a swastika pendant.

Shein’s website listed a “Metal Swastika Pendant Necklace” on Thursday morning. By Thursday afternoon, Shein had removed the product, but not before sparking outrage and calls for boycotts of the company.

“In case u needed another reason to boycott shein: they are selling fucking SWASTIKA NECKLACES. this is ACTIVELY THREATENING to the jewish community. i’ve seen you all posting about other issues but being silent on antisemitism – do NOT let shein get away with this,” one person tweeted.

“We also formed a product review committee with staff from different cultures and religions so a mistake like this doesn’t happen again,” Shein wrote on Instagram after removing the rugs from its website.

“Not sure what’s more concerning- that @SHEIN_official STILL has this swastika necklace up on their site or that swastikas are considered in-fashion now,” one person tweeted.

People pointed out that the direction of the symbol on the necklace correlates with the original meaning of the swastika as a Hindu symbol of divinity and spirituality.

However, German Nazis appropriated the swastika and flipped the symbol to represent Adolf Hitler’s regime. Today, the symbol is widely recognized at a mark of anti-Semitism.

Others on Twitter called for a boycott of Shein, and a Change.org petition calling to “ban shopping” at the retailer had more than 2,300 signatures by Thursday afternoon.

“This is a symbol of hate and a reminder of the horrible extermination of not only Jewish people but many many others too,” one person tweeted.