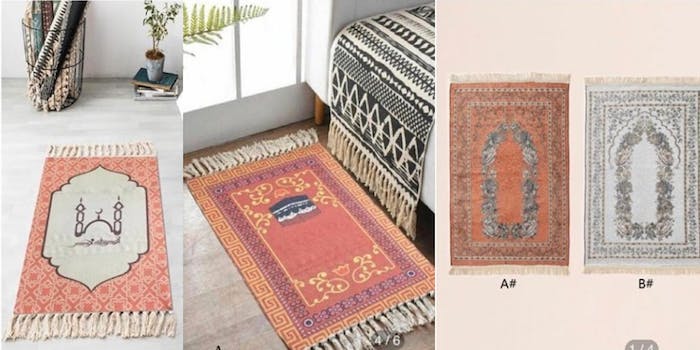 Shein removed the mats from its site and formed a 'product review committee.'

A U.K.-based student, 24-year-old Khadija Rizvi, posted screenshots on Instagram of the prayer mats being sold on Shein’s site under the name “fringe trim carpets.” Rizvi said she was “disgusted” and “livid” at the retailer.

“THIS IS HIGHLY OFFENSIVE,” Rizvi wrote on a post that got more than 58,000 likes. “Not only is it disrespectful but they once again renamed and stole credit from a whole faith this time, by failing to label it as a muslim prayer mat; which allows people to use it casually as a decorative mat.”

In one review, a customer wrote that they purchased the mat for their cat’s food and water and that their cat “absolutely adores it.” Rizvi included more screenshots of reviews showing customers using the mats as home decor.

Rizvi wrote that the prayer mats are placed between the ground and the worshipper during their five daily prayers. She said the mats must be treated with respect.

She urged her followers to boycott Shein, raise awareness on social media, and send emails to the company.

“It’s important for us to acknowledge the disrespect that is committed here,” Rizvi wrote. “And that action must be taken to remove this product from their line.”

Malak, a 15-year-old who spoke out against Shein on Twitter, told the Daily Dot that as a Muslim, she was “offended and disappointed” to see religious mats sold that way.

Shein removed the prayer mats from its site and apologized Monday, writing that it was a “highly offensive oversight.”

“Since it was brought to our attention, we immediately removed the products from our site and asked our vendor to stop selling to others,” Shein wrote on Instagram. “We also formed a product review committee with staff from different cultures and religions so a mistake like this doesn’t happen again.”

Malak said she was “happy” with Shein’s quick response but still questioned the company’s initial intentions.

“It still pisses me off since they’re obviously mats with mostly mosques drawn on them, so they would’ve known that it’s wrong to be sold,” Malak said.

Other social media users expressed their frustration with the clothing company, writing that Shein’s actions were “beyond offensive” and “absolutely vile.”

One person wrote that they were “angry and offended.”

Another wrote that the so-called “carpets” were “so disrespectful.”

Shein did not immediately respond to the Daily Dot’s request for comment.

Update 10:29pm CT, July 8: This story has been updated with quotes from Malak.