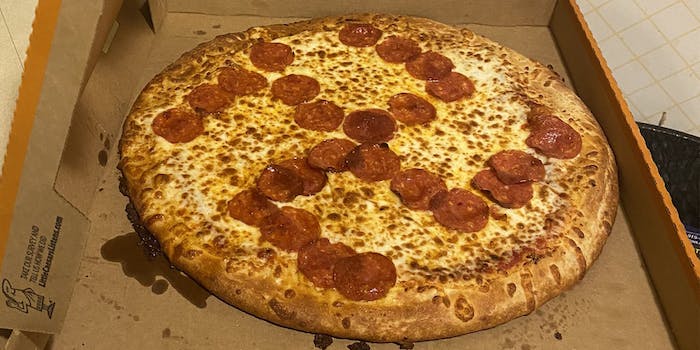 The swastika was apparently an 'inside joke' between two teen employees.

Little Caesars fired two employees who arranged pepperoni slices on a readymade pizza into the shape of a reverse swastika, CNN reports.

Jason and Misty Laska, an Ohio couple, made the unseemly discovery on Saturday when Jason picked up a Hot-N-Ready pizza from Little Caesars’ Brook Park location, outside Cleveland. When they opened the pizza box, they were aghast at what they saw.

“We were literally silent for a few moments,” Laska told CNN. “Misty asked me if I had ordered it and they had to make it and they gave me that on purpose, thinking they were targeting me because they stereotyped me or something.”

After failing to reach the store over the phone, Misty Laska aired her disappointment on Twitter.

“So my husband stopped at #LittleCaesars for a quick bite, husband brings this home! I’m truly disappointed,” she tweeted. “This is truly saddening and disturbing and not funny at all! These aren’t funny jokes and shouldn’t be made period and on company time?!”

Little Caesars told the Laskas the swastika pizza was an “inside joke” gone wrong, HuffPost reports. The pizza chain immediately fired two teenage employees who admitted to the stunt. Still, the Laskas don’t plan on revisiting the store.

“We’re trying to get rid of racism,” Misty Laska told News 5 Cleveland. “Just to remind people that keep saying, ‘There’s no racism,’ it’s like, yeah there really is still racism and right here is your proof.”