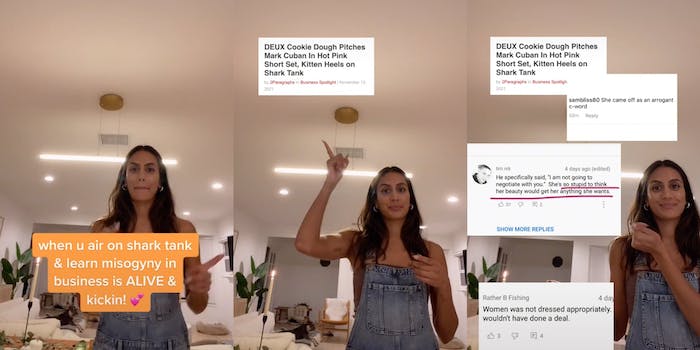 In her TikTok, Sabeena Ladha says she learned that misogyny in business is 'ALIVE and kicking' after the episode aired.

A woman on TikTok called out misogynistic comments about the outfit she wore to pitch her business on the TV show Shark Tank. The outfit was a hot pink suit set with an above-the-knees skirt and high heels.

The show features a panel of potential investors, or “sharks,” who listen to entrepreneurs pitch ideas for a business or product they wish to develop.

Ladha pitched her business on the Shark Tank episode that aired Nov. 12. She originally walked into the room of potential investors filled with confidence but was unable to close a $300,000 deal, according to reporting by CNBC.

In her TikTok, Ladha says she learned that misogyny in business is “ALIVE and kicking” after the episode aired. She demonstrates her claim by showing screenshots of comments about the outfit she wore during her pitch.

“DEUX Cookie Dough pitches Mark Cuban in hot pink short set, kitten heels on shark tank,” one of the screenshots, which appeared to be of a headline, said.

Another read, “She came off as an arrogant c-word.”

Two additional comments referenced the outfit she wore, saying it was inappropriate and alleging that Ladha thought her beauty would seal the deal with a shark.

Ladha captioned her TikTok, “silly me! should’ve known my place is in the kitchen not in the board room!”

Viewers mostly sided with Ladha, saying she shouldn’t have faced commentary about her outfit.

“A headline about the outfit??! Ughhh,” one viewer commented. In response, Ladha wrote, “WILD. ‘Man in grey polo pitches to Mark Cuban’ ?? lol.”

Other viewers also called out a double standard, pointing out how other entrepreneurs on the show weren’t called out for dressing “unprofessionally.”

“There’s literally people on Shark Tank in T-shirts and jeans all the time, and I NEVER see anything about them not being dressed appropriately,” one person said.

Some TikTokers commented that they were excited to look up the outfit Ladha wore to the pitch after seeing her TikTok but felt underwhelmed when they saw it.

“Ngl I was excited to see this scandalous outfit they were talking about and it turns out to be a very tame, beautiful suit set,” a viewer commented. Another TikToker asked why anyone would have a problem with the suit set: “Just cause it’s pink???”

During the Shark Tank episode, one of the sharks, Robert Herjavec, said he didn’t like sweets, but he wanted to invest in Ladha rather than her company. He offered her $300,000 for 15% of her company’s equity, according to CNBC.

But Ladha spent too much time haggling over the specifics of the arrangement, causing Herjavec to pull out of the deal even after she eventually agreed to his initial terms.

The other Sharks also decided not to invest, voicing concerns about the cookie dough’s calorie count, which is 110 calories per 28 grams of cookie dough spread. The sharks argued that the company’s target demographic excluded most health-conscious consumers.

The Daily Dot has reached out to Sabeena Ladha via the @eatdeux TikTok account.