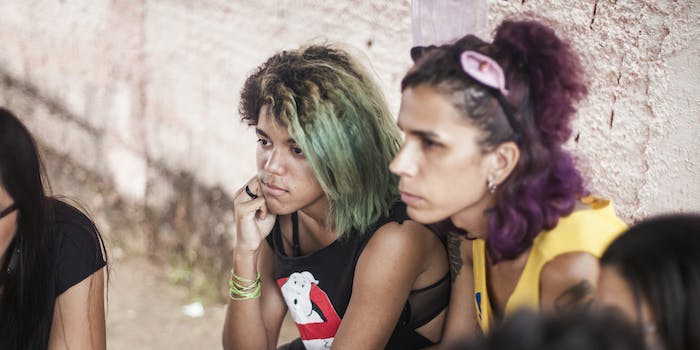 LGBTQ teens face sexual assault at higher rates than most

Anthony Rapp’s alleged sexual assault is not an anomaly.

Late Sunday, BuzzFeed News published an interview with actor Anthony Rapp accusing House of Cards lead Kevin Spacey of sexually assaulting him when he was 14. The actor later came out as gay amid the allegations, sparking backlash for his timing, deflection, and general conflation of predatory behavior and sexuality.

But Rapp’s allegations against Spacey aren’t an outlier. In fact, sexual harassment and assault are ongoing problems in the queer community. And for the most marginalized members within the LGBTQ letters, assault rates remain startlingly high.

In 2016, BuzzFeed LGBT’s U.K. editor Patrick Strudwick wrote a piece on domestic violence and emotional abuse in the queer community. He described a pregnant queer woman named Sam, who was repeatedly sexually assaulted by her girlfriend Lynn. According to Sam, it was extremely difficult for her to come out and seek help within her community, in part because sexual assault is so gendered. Her queer friends think of rape in purely heteronormative terms, equating assault with vaginal sex between a cis man and a cis woman.

“How do you say to your friends, ‘My girlfriend rapes me’ when their only mental definition of rape is a man forcing his penis inside a woman’s vagina?” she told BuzzFeed. “How do you say you were assaulted when it comes back to the idea of ‘that doesn’t count?’ Well, it does count.”

And it’s pervasive. According to the National Center for Lesbian Rights, one in eight lesbian women are raped in their lives, and four in 10 gay men are exposed to sexual violence. Nearly 50 percent of all bisexual women experience sexual assault in some form, as do bisexual men. And when it comes to transgender people, 64 percent are assault survivors.

IPV and sexual assault are unacknowledged experiences for LGBTQ individuals. Join us, 2:00 in TUC 400A to learn more@whwucadv @UC_STREngTh pic.twitter.com/xpN3NhlZgT

The Human Rights Campaign expands on those statistics with even wider margins. According to HRC, nearly half of all lesbians have been raped, experienced domestic violence, or stalked by their partner. That number jumps to 61 percent for bisexual women. And over a quarter gay men have been raped, stalked, or experienced domestic violence from their date. Again, that number increases for bisexual men, clocking in at 37 percent.

Why are LGBTQ assault statistics so high? When it comes to intimate partner violence, the staggering rate for LGBTQ couples could indicate a combination of living in a culture that hypersexualizes gay, lesbian, and bisexual people while also making them feel ashamed for being queer. LGBTQ folk are also more likely to be poor and stigmatized. In other words, when it comes to sexual violence, it’s easier for aggressors to ensnare victims who have less power.

For the most marginalized groups in the LGBTQ letters—particularly transgender women and queer women of color—there aren’t many resources available for support. A transgender woman seeking safe refuge from partner violence may be turned away from women’s shelters, even in progressive cities like New York that specifically outlaw this behavior.

“Societal discomfort with transgender persons has rendered transgender victims of sexual assault, gay-bashing, and domestic violence without necessary services,” Blue Grass Rape Crisis Center notes. “Medical personnel can respond with judgment and have been known to withhold care to people they perceive to be cross-dressing. The criminal justice and the legal systems often re-traumatize victims.”

And for a queer teenager who may be exploring their gender identity and sexuality for the first time, an abuser in a position of power and control may be able to manipulate them for their own advantage. Think about Rapp’s allegations against Kevin Spacey. In the mid-1980s, there was much less open conversation about sexual assault in American culture, let alone about a teen boy victimized by an older man. Where could a 14-year-old go if he was assaulted by an older, successful Broadway star?

Rape IS NOT about sex or intimacy. It's about power & control & it can happen to anyone no matter race, religion, LGBT, man or woman #metoo

Even today, queer teens assaulted by predatory men and women may have a fledgling support system that’s unable to help them, if not actively working against them. Some families blame the child for their own assault or burden them with shame for being queer. And police departments around the country still struggle with handling sexual assault cases, let alone respectfully dealing with LGBTQ victims. Combined with internalized homophobia, transphobia, or biphobia, the trauma LGBTQ sexual assault survivors face is further magnified.

“My self-esteem has been shot to pieces,” Sam told BuzzFeed. “It’s taken years to rebuild, to get me back to a place where I realize I’m worthy of love that isn’t transactional or conditional.”

As the LGBTQ community continues to talk about the sexual allegations levied against Spacey, remember that there’s a larger issue going on. Queer and trans Americans—much like women of color—are regularly targeted for harassment and assault by abusers who know they have nowhere to turn, who know they might not be believed. And living in a society that still stigmatizes gay, bisexual, and transgender people for being who they are makes it all the worse for victims to come out and call out their abusers.