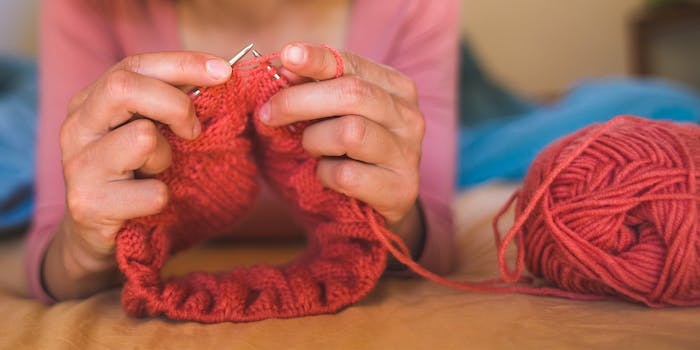 We’re in the midst of a major reckoning as people across several industries and communities feel empowered to speak to the systemic racism and sexism they’ve faced at work and online. But the politics, political correctness, and the so-called “online knitting mob” recently became the catalyst for one knitter to change her mind about President Donald Trump.

The five-minute video from Prager University—which is a non-profit (and not a real university) that promotes “knowledge and clarity on life’s biggest and most interesting topics” and is often right-leaning—centers on psychologist and author Karlyn Borysenko, who started knitting to “relax, to escape the drama of real life,” but became increasingly uncomfortable with the idea of knitting becoming political “like almost everything nowadays.”

Borysenko, who says that she found some Trump supporters’ view to be abhorrent but was also uncomfortable with the idea that people who don’t have politically correct views aren’t welcome in forums, details how attending a Trump rally changed her perspective; she praised the rally’s “optimism and enthusiasm” compared to the “doom and gloom” of a Democratic rally she attended a few days earlier. The video is filled with cute animation, which becomes almost comical, such as when she insists that the “online knitting mob” is mean and the animation zooms in on a knitted pirate flag. (And yes, the phrase “online knitting mob” is used with 100% sincerity.)

Her story is presented matter-of-factly, but it doesn’t provide any greater context into the politics of knitting she took issue with, nor does she go into detail about the policies she heard at the rally. It’s made to sound like those who held politically incorrect opinions were banned for having those opinions, inferring censorship in cases where platforms (which are often privately owned) made online spaces more inclusive and welcoming by banning racist and white supremacist language.

But the idea that knitting has only recently gotten political is, in and of itself, a silly one. Knitting, and the larger scope of crafting, has always been political.

Although Borysenko doesn’t elaborate on how knitting has become political, a couple of recent news stories might offer some insight. Last year, Ravelry—a crafting social network that’s akin to Facebook for knitters and crocheters—banned users who voiced their support for Trump, equating his views to white supremacy. The move was made to make the site more inclusive, noting that “We cannot provide a space that is inclusive of all and also allow for open white supremacy.”

And in February 2019, Vox reported on a recent reckoning from within the knitting community that highlighted the racism many knitters who are Black, Indigenous, and people of color (BIPOC) faced in their communities. It went into detail about how bias and privilege often perpetuated the idea that only white people are interested in knitting, own yarn shops, design patterns, and dye their own yarn—and how BIPOC are routinely ignored—as well as the larger classism associated with yarn choice; for instance, people are sometimes judged by others for purchasing acrylic yarn, which usually costs a lot less than higher-quality yarns.

At several Women’s Marches that took place in 2017, pussyhats—a direct protest to Trump’s comments about grabbing women “by the pussy” in the infamous Access Hollywood tape—became one of the hottest items. Knitting has been used to support pro-choice laws as well as to call senators to get soldiers out of Iraq.

If you go further back, several women participating in a hunger strike at a British prison embroidered their names on a handkerchief in 1912, one of whom participated in a Suffragette window-smashing campaign. Knitting and sewing played into the fight for women’s right to vote, and while some distanced themselves from those tasks as the perceived domesticity of knitters were used against them, others weaponized it for themselves to convey that they would still be the same women if they receive the right the vote. Women discussed abolition (and some even designed or sold products) in pre-Civil War sewing circles. Balls of yarn have been used to hide messages during times of war. And even then, it’s only a brief glimpse of political crafting—and one that focuses largely on Western history.

Knitting often invokes a picture of a grandmother-type (even though people of all ages and all genders knit), and it can often be relaxing, a stress reliever, and a way to connect with other people. But, more often than not, knitting is also political as hell—even in a video complaining about politics in knitting eventually led to reevaluating views about Trump voters and ultimately attending a Trump rally.