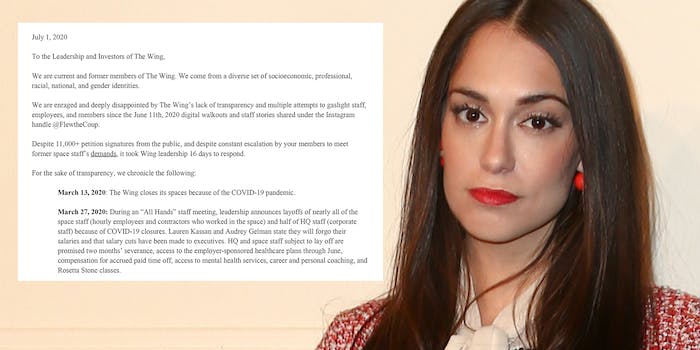 A letter obtained by the Daily Dot outlined 44 demands.

The Wing, a women-centered co-working space with locations across the U.S., has come under fire in recent weeks for the alleged mistreatment of staff and members of color. Now over 750 members and former members of the Wing have formed a coalition and released a list of demands.

In a July 1 letter obtained by the Daily Dot, the coalition accused the leadership of “gaslighting” staff after the Wing’s locations were closed to due the coronavirus and presented 44 demands to its leadership and board.

Chief among the demands were that the Wing release current and former employees from non-disclosure agreements and make $500 grants available to all former and current staff members, in addition to 48 professional therapy sessions.

The letter claims that on March 27, co-founder and former CEO Audrey Gelman told employees during a staff meeting that she would be forgoing her salary to support laid-off workers. But in a private email sent April 3, Gelman allegedly clarified that she would take her salary, which the coalition estimates to be at least $500,000, and give a post-taxed amount to the Wing’s employee relief fund. Screenshots show that when she was called out on the discrepancy in an email, Gelman replied, “It’s semantics.”

In a response to the letter obtained by the Daily Dot, the Wing wrote that “many of the action items on your list are already complete or in progress,” The company said it was giving “cash grants and mental health support” to former staff, launched a code of conduct, and translated emails to employees into other languages.

“That said, while we are directionally aligned, your letter includes much misinformation,” the response said.

The letter to leadership followed several weeks of unrest within the Wing’s larger community.

Shortly after the Wing shuttered its New York locations and laid off staff due to the coronavirus, the company launched a GoFundMe. After the fundraiser reached its $100,000 goal, it was unclear how those funds were distributed. There was no evidence, according to the letter, that priority was given to furloughed staff.

Less than a month later, the company announced that it would make a $200,000 donation to Black Lives Matter, Color of Change, the NAACP legal defense fund, and the Brooklyn Community Bail Fund.

On June 11, Gelman resigned from her role as CEO. Immediately after, the current staff staged a digital walkout and made a private list of demands. Meanwhile, former space staff of the Wing shared stories of discrimination and abuse in the Wing’s spaces via an Instagram account, @flewthecoup. They also made their own public list of demands.

A representative of the member coalition who asked not to be named told the Daily Dot, “We wanted to amplify [@flewthecoup’s] demands.”

Membership fees for the Wing were been placed on hold due to closures, but many members paid for a full year’s membership in advance. In its response to the letter, the Wing said members “are able to request a refund for dues paid upfront.”

In addition to supporting @flewcoup’s demands to lift non-disclosure agreements, offer grants to former space staff, and offer funds for therapy and counseling, the coalition demanded that Gelman give up her current seat on the Wing’s board and sell her 10% stake-holder share in the company.

The list of demands also includes guidelines for the Wing to follow should future co-working spaces reopen. It demands the Wing offer all of its staff a living wage for an adult with one child based on the space’s location, “establish an anti-racism code of conduct,” and “create an elected board of members per location that is empowered to review misconduct by Wing members and guests.”

In a statement to the Daily Dot, a representative for the Wing said the company is “happy to have a conversation” with members.

“We know the future of The Wing must look very different from what it has been, and we’re invested in building a healthier business and culture moving forward, starting with our new culture code,” the statement said.