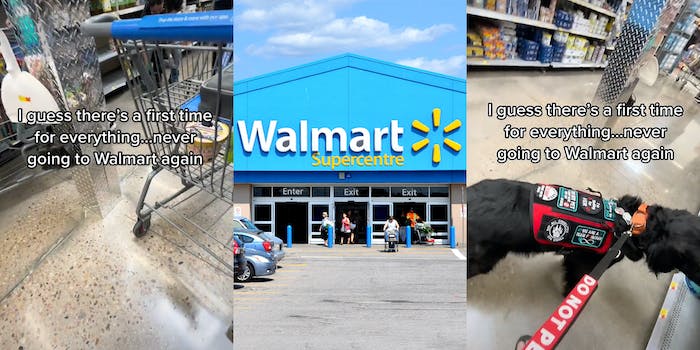 ‘This was our first and last trip to Walmart’: TikToker calls out Walmart customer whose pet dog was aggressive toward her service dog

'None of the employees in the aisle did anything!'

A TikTok video of a dog allegedly being aggressive toward a woman’s service dog inside a Walmart went viral. The video, which was posted by @Hanktherescue on TikTok, has been viewed over 1.3 million times.

The video text overlay reads, “I guess there’s a first time for everything…never going to Walmart again.” The clip starts off with incoherent talking as the TikToker walks alongside her service dog and shopping cart. Then another dog in the aisle starts barking and snarling toward Hank, the service dog.

“This is a service dog-only store,” Hank’s owner, Sarah, says to the woman.

The woman responds while picking up her dog but it’s unclear what she says. Sarah responds, “no, that’s not a service dog.” A few seconds later she adds, “no, your dog is aggressive and I have an actual service dog. Jesus Christ.”

The owners of the other dog walk away from the aisle as their pet continues barking aggressively. Sarah replies sarcastically, “Yeah, it’s not aggressive?”

At the end of the clip, the woman can be heard saying, “he likes to play.”

During the entire incident, it looks like Walmart employees stood there and did nothing. In the video, Sarah goes around them to get away from the woman and her dog. The caption of the video confirms it.

“[Wait] for what they say at the end,” she wrote in the caption. “None of the employees in the aisle did anything! This was our first and last trip to @Walmart.”

Users in the comments section had mixed reactions to the situation. Some immediately jumped to Sarah’s defense, while others didn’t think the dog was being aggressive.

“This is a real problem. There are a lot of random dogs going into Walmart now. It needs to be controlled,” one person commented.

“Normalize calling people out!!! I don’t have a service dog but call people out when they bring their house pets to the store,” another person wrote.

“You could’ve just let them pass by you and the whole thing would’ve been over in 10 seconds,” another said.

One viewer called out Walmart, urging the retail corporation to do better.

“@walmart yall need to do something, that could have went really bad,” a user wrote.

Other users defended the Walmart employees for their lack of involvement.

“The problem is Walmart employees cannot question whether or not a dog is a service dog,” one person said.

“Walmart can’t discriminate on animals if they allow service dogs they allow all I’ve straight up seen a goat in my Walmart,” a second agreed.

However, other users said that those claims were false.

“Per ADA you can ask 2 things: “is that a service dog?” “What task is it trained to perform,” one user advised.

According to the Americans with Disabilities Act, this is true. In situations where an employee isn’t certain that a dog is a service animal, they may ask only two questions: “(1) is the dog a service animal required because of a disability? and (2) what work or task has the dog been trained to perform?” However, employees are not allowed to ask for any proof or documentation.

Others suggested the dog could’ve been an emotional support animal, but Sarah was quick to shut down the speculation.

“It could of been an emotional support dog my dog barks when people come near us and guess what he is a service dog he’s registered for our daughter,” one user said.

The Daily Dot reached out to Sarah via TikTok comment and email and Walmart’s media relations team via their contact form.