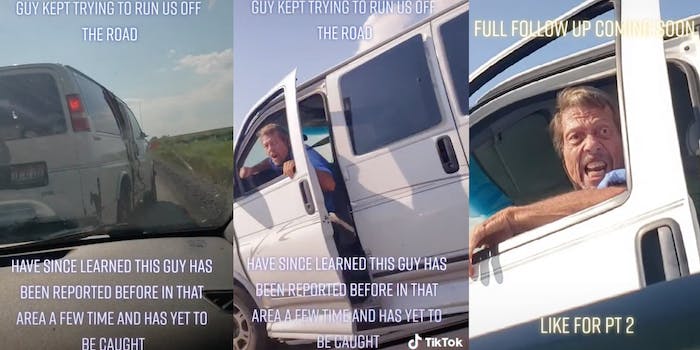 The driver was later arrested after a separate, similar incident.

A terrifying road rage incident caught on camera and shared to TikTok led to more people coming forward about the same man, and, ultimately, his arrest.

Kaleb Moore (@smoorepar) was the passenger in a vehicle when he encountered Chris Hamburg driving along the same road in a beat up white van.

According to Moore, Hamburg was a ways ahead of them when he, for some unknown reason, decided to pull off to the side and wait for them to go by.

“He followed us and took pictures of our plates. We stopped to let him pass which sent him into a road rage fit,” the TikToker explained.

Video shows Moore’s car slowing down to where Hamburg is stopped on the side of the road and asking if there’s a problem. Hamburg replies with “Do you have a problem, bitch?” and threateningly opens his door as if to escalate things. The driver with Moore speeds up to move along, but Hamburg soon starts tailing them, and eventually tries to force them off the road entirely.

Hamburg pulls over again, opens his door, and yells out that he’s “gonna beat your fucking ass” even as the driver with Moore continues trying to get away and pulls out his phone to call the police. They eventually lost him once they got to a construction area.

But Moore allegedly isn’t the only person who has been terrorized by Hamburg. He says other people sent him screenshots of videos and photos showing the same white van with a wood panel in place of a window attempting to run others off the road in previous months.

“There were sightings in three towns around that area, including people giving away that same license plate number, same description of the van, same description of the dude, same actions,” he said. “Including I was given a message from an aunt who said that her nine-year-old niece was chased after by this dude and even followed home. It’s completely sickening.”

According to WCIA, Hamburg was arrested on August 25 after Helene Ellis spotted his vehicle at the Super 8 motel where she was staying. She says he tried to run her and her daughter off the road in Rantoul, Illinois, about a month earlier. She had posted her own story to Facebook at the time, trying to gather more information and discovered, as Moore did, that it was not the first time Hamburg had done something like that. Nobody knew where he was until she and Hamburg both wound up at the same motel.

He was booked into the Vermilion County Jail for disorderly conduct. Moore says he was told there are additional warrants out for Hamburg in Idaho and Wyoming, so he is hopeful additional charges will be brought against him.

However, Moore also added that “the police seem to not want to do much or get involved in this,” and told someone in the comments that “it took the story of the 9 yo for them to act.”

The Daily Dot has reached out to Moore via TikTok comment.