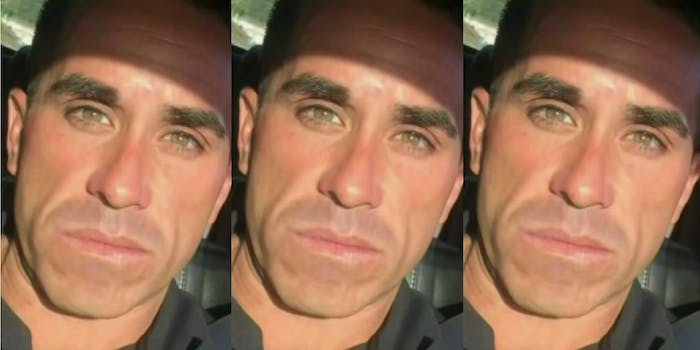 He faces up to 13 years in prison.

If the men of New York’s greatest Tinder prank thought getting roped into a mass-dating competition was bad, at least they weren’t ditched mid-date and forced to foot an expensive bill.

According to the Washington Post, one Los Angeles-area man now faces 10 felony charges for doing just that to unsuspecting women he met through online dating websites.

The Los Angeles District Attorney’s Office said Monday that 45-year-old Paul Gonzales was arrested this week for screwing over a series of dates and restaurants from May 2016 to April 2018.

Gonzales would meet the women online, invite them to dinner, and order expensive menu items, sometimes multiple meals. He’d then give himself an excuse to leave, fleeing the scene and sticking his dates with a bill of up to hundreds of dollars. One woman reported having to pay $250—another, $163, and a third date, $130.

He’s pleaded not guilty to seven counts of extortion, two counts of attempted extortion, and one count of grand theft, his dating debauchery totaling $950. If convicted, he could face up to 13 years in prison.

The number of women who were screwed over in this fishy scam is unclear—eight women are listed as victims in the charges against Gonzales, along with two restaurants that ended up paying for the meals instead of making his duped dates pay up. However, an Inside Edition article from May says that more than 20 women say Gonzales played them for wining and fine dining.

Carol Meredith had told Inside Edition that before going on a date with Gonzales, he had “said all the right things” to her online and had even texted her a picture of an athletic man’s arms and torso, who she doesn’t believe was Gonzales himself. By the time she had arrived at the restaurant, he was there and had already eaten, but ordered another meal with her. After he finished, he excused himself, but a manager recognized Gonzales from news reports and told him to leave.

In 2016, Gonzales ditched a hair salon after receiving $100 in services—a haircut and color—under the fake name “Tony Azini.”

“I didn’t mention it to the restaurant, nothing. I think I was more embarrassed, my pride was just like, you know, I felt dumb,” one of the women, Michelle, told CBS LA in May. “He owes every woman an apology. I think that would humble him, by having him apologize to the women.”