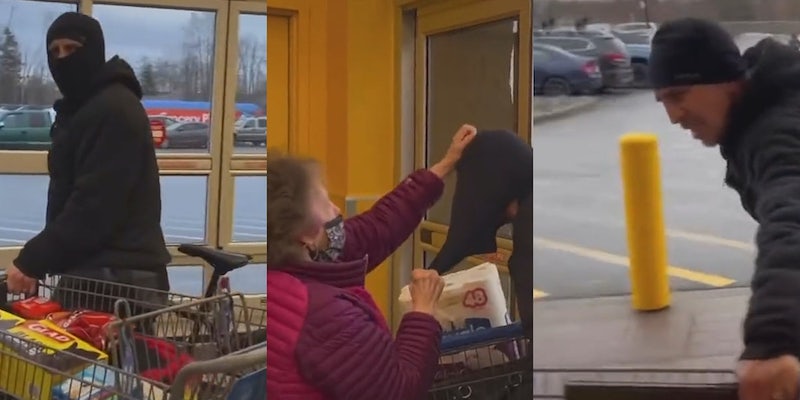 ‘It costs nothing to look the other way. Food is essential’: Senior citizen takes down alleged shoplifter taking groceries at Walmart, sparking debate

'He looked really sad I feel so sorry for him.'

A video showing a senior citizen-aged woman successfully stopping a shoplifter at Walmart has garnered 7.3 million views and sparked a debate about the ethics of stopping shoplifters in its comments section.

It is unclear where the original video came from, but it was posted to a TikTok account largely sharing videos of attempted shoplifters, @lprentapopo.

In the video, a man wearing a black hooded sweatshirt and ski mask is pushing a full cart of what appear to be name-brand groceries when he is asked by the person filming if he is going to pay for it. He replies “yes” and keeps moving toward the door when he is stopped by an older woman who is about to cross the threshold of the sliding doors. As he attempts to push past her, she pulls his mask up, revealing his face. She and the person filming yank his cart back into the store.

Commenters are debating whether it is ethical to stop shoplifters who may not have money to pay for laundry detergent or other items that were in this man’s cart.

“Society is a construct and since we can automate things eventually everything will be free,” one commenter wrote. “Why should companies profit and poor people suffer?”

“Is mostly food I would’ve just let him leave,” another commenter wrote. “Workers really out here doing the most for companies that will replace them in a heartbeat smh.”

“He looked really sad I feel so sorry for him,” a commenter wrote. “I don’t agree with what he did but I wouldn’t have stopped him if that makes sense?”

“It costs nothing to look the other way. Food is essential,” another said.

Others argued that stealing is wrong, no matter what is being stolen.

“Whatever justification people have this for this man it’s called stealing,” one commenter wrote. “Everyone struggles, but does that mean we steal whenever we need it? No.”

“Get on government assistance, go to a food pantry, get emergency assistance,” another commenter wrote. “Stealing is 100% not ok! If you’re defending this just wow.”

“Everyone saying, ‘it’s food let him,’ it’s a whole buggy full!” a commenter wrote. “Nah, that’s too much. It’s not like he took a few things. He had so much stuff in there.”

The Daily Dot has reached out to Walmart via email as well as to @lprentapopo via a comment on the video.