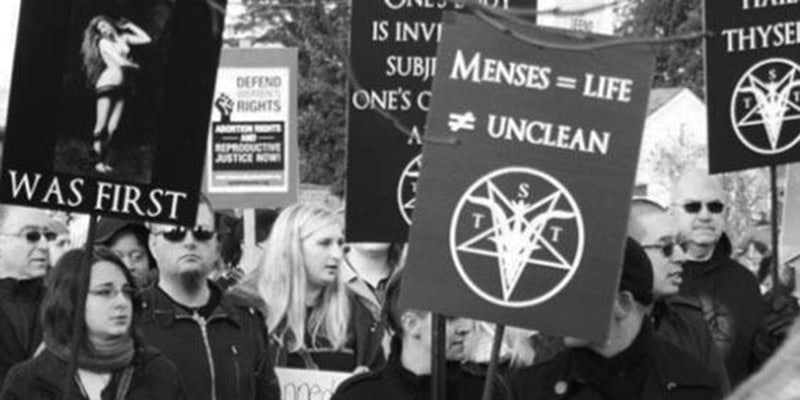 The letter came after a prohibitive abortion law passed in Texas.

The Satanic Temple announced online Thursday that it demanded the Food and Drug Administration (FDA) grant the group access to drugs that induce abortion “without being subjected to the agency’s regulations.”

In particular, the temple is requesting access to Misoprostol and Mifepristone—also known as the abortion pills to terminate an unwanted pregnancy—under the Religious Freedom Restoration Act. Its letter to the FDA came the same day that the Supreme Court upheld a Texas law that prohibits abortions after six weeks.

The Satanic Temple is a non-theistic religious group focused on secularism and individual liberties based on 18th-century Enlightenment values. The temple was the subject of the 2019 documentary Hail Satan?, which describes the group’s progressive activism.

In pursuit of a religious exemption to access abortifacients, or drugs that induce abortion, The Satanic Temple website details that its lawyers have contacted the FDA. The temple aims to raise 200,000 to cover its legal costs throughout its “continued effort to preserve religious reproductive rights.”

In a phone interview with the Daily Dot, co-founder of the temple, Lucien Greaves, said the temple has litigated in defense of religious reproductive rights before in Missouri and Texas.

“We were fighting against restrictions upon abortion access before yesterday’s almost all-out ban of abortion in Texas,” Greaves told the Daily Dot. The temple has an ongoing lawsuit in Texas.

Greaves explained that in August 2020, the temple ritualized the process of getting an abortion for its members in response to the emotional need of congregants and increasingly prohibitive abortion legislation nationwide.

In addition to requiring a medical examination to ensure that an abortion won’t be a danger to a member’s health, the ritual involves counseling before and after the procedure. Greaves said counseling focuses on the member’s personal ethical values and the temple’s tenets, which emphasize the importance of science and personal freedom.

Because abortion is part of one of the temple’s religious rituals, the group feels that the government should not be able to interfere with its religious practices beyond medical mandates. Thus, it requests abortifacients for its rituals in accordance with the Religious Freedom Restoration Act, which “prohibits any agency, department, or official of the United States or any State (the government) from substantially burdening a person’s exercise of religion even if the burden results from a rule of general applicability.”

The act overturned Oregon v. Smith (1990), a Supreme Court case that ruled that generally applicable laws that don’t target specific religious practices apply to religious practices. Under the law, The Satanic Temple is hoping that courts will rule it can administer abortion pills despite bans because abortions are a religious practice for the temple.

“It’s easy to look at the political circumstances now and see that as simply opportunistic on our part,” Greaves told the Daily Dot. “But the political battles over abortion simultaneously make this legitimately a more important issue in regards to our religious liberty.”

Raylene Traylor, a member of The Satanic Temple, said their decision to join the temple involved a desire for reproductive freedom, though they had been following the temple’s work prior to joining.

“It was during the Amy [Coney] Barrett hearings that I decided to officially join,” Traylor told the Daily Dot in a Twitter direct message. They said that they do their best to live according to TST’s tenets.

“We’re not here to question that,” Greaves told the Daily Dot.

In response to Texas’s prohibitive ban on abortions, temple members have been sharing their organizational beliefs on social media.

“Dear Texas Women,” begins a now-deleted tweet from Isabelle Malia (@smoltog). “The Satanic Temple has filed a letter of exemption for abortion procedures under religious exemption laws to fight the abortion ban.”

Malia, who told the Daily Dot that she is a member of the temple in a Twitter direct message, called the temple “an amazing resource” for people seeking abortions. She joined the group in 2019 after a restrictive abortion bill was passed in Alabama.

“Reproductive freedoms and the loophole that [the temple] was working to provide was a cause I wanted to support,” she told the Daily Dot.

“Once again @satanic_temple_ is out there doing the work to protect #bodyautonomy,” tweeted @AmieHoefnagel. “Consider checking out this group and what they stand for. Don’t reject based on the name.”

In a Twitter direct message, Hoefnagel told the Daily Dot that she has been a member of TST since 2015.

“I fell in love with the 7 tenets and the fact that they/we are actually utilizing religious ideals for the better of all people,” said Hoefnagel. She told the Daily Dot that, as a physician, she feels that governments should not get in between doctors and their patients and that physicians should not be “religious warriors.”