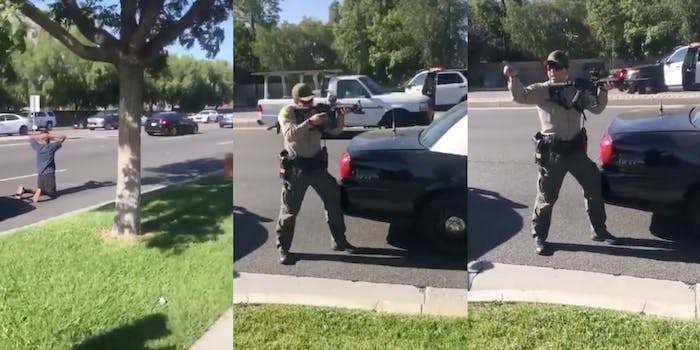 'I'm the one that called you! It was not them!'

The Los Angeles County Sheriff’s Department responded on Friday to a call of an attempted assault and pointed their guns at the Black teens who were the victims of the alleged attack.

Bystanders called the police after a man experiencing homelessness allegedly attacked the teen and his friends while they were sitting at the bus stop in Santa Clarita, California. A viral video shows deputies pointing their guns at a teen despite bystanders yelling to explain that he was innocent and the victim of the attack.

The video shows one deputy pointing an assault rifle at the teen, who can be seen with both hands behind his head.

“Look at this! This is crazy. It was the other guy,” the bystander recording says. The person recording then begins yelling at the teen. “Keep your hands up! They don’t care ’cause they’re Black.”

In the background, several other people plead with the deputies to stand down. Several voices can be heard screaming that it wasn’t the teen who had assaulted someone.

“Put your guns down! They’re kids! I’m the one that called you! It was not them!” one woman screams as she slowly approaches the deputies with her hands up. “Sir, can I please talk to you for a minute?”

The teens can be seen on his knees with his back to at least four police officers who are pointing their guns at him. The bystanders continue to try and explain to the deputies that they have the wrong person, but they put the teen in handcuffs anyway.

The teen’s mom posted the video on Instagram, where it started to go viral over the weekend.

The mom said in the Instagram caption that several people including a manager at Buffalo Wild Wings near the bus stop called the police when the man experiencing homelessness began allegedly attacking the boys with a knife. The boys used their skateboards to shield themselves from his attacks.

However, the sheriffs told the mom that they detained the teens because one person had called in and said that “two Black guys are attacking a homeless guy.”

“How will I help my son recover from this?” the mom questioned in her video caption. “This is something my son and his friends will never forget…Please pray for my family.”

The video has since migrated to Twitter where it’s been shared thousands of times. The Los Angeles County Sheriff Alex Villanueva released a video statement on Twitter on Monday evening.

“I have concerns about the tactics employed,” Villanueva said in the video. “A call for service was received regarding a felony assault, and the deputies detained those alleged to be involved. The matter is currently being investigated.”

The sheriff’s department has released the two teens that they had detained. The police blamed an “uncooperative” crowd for having called several officers to point their guns at the young teens.