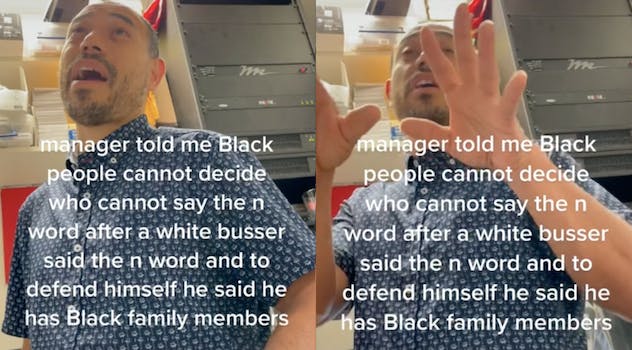 ‘It should have never came out of his mouth’: TikToker confronts Saltgrass manager for allegedly defending white busboy who used the N-word

The white busboy allegedly called a Black busboy the N-word.

A TikToker says that her manager at Saltgrass Steak House in Lubbock, Texas, told her that that Black people can’t tell anyone who can and cannot say the N-word.

The TikToker says that the conversation started after she heard a white busboy call a Black busboy the N-word. Angel Acheam, the TikToker who posted the video, initially uploaded a video claiming that, “I told my racist manager a white busser said the n-word and he said it’s okay for anyone to say and that it’s not for Black people to decide.”

She is filming the manager and set the video to circus music.

Acheam reuploaded the video without the music so that the conversation between the two was more easily decipherable. “You cannot tell them, ‘No you’re wrong’ because you do not live your life every day looking like me,” Acheam can be heard saying.

Both videos have a combined 15,000 views since being posted on Sunday.

The manger defends himself by saying, “I have nieces and nephews that are Black.” Acheam begins to say that this is a common defense of people who want to use the word, but her manager cuts her off and says she has the situation confused.

She responds and clarifies that the white busboy did not “use the word as a term of endearment.”

“He used it to degrade that other busser. It should have never came out of his mouth. He should not ever think it. He should never repeat it,” she adds.

The comments section was filled with outrage from people who said the manager should be fired. One person left a comment that said, “I don’t know why relation to Blackness is anything people use to justify them saying it.”

“I would’ve lost my job that day,” another person wrote in the comments, referring to how they would’ve reacted if they were in Acheam’s shoes that day.

The Daily Dot reached out to Acheam and Landry’s, the corporation that owns the Saltgrass Steak House franchise.