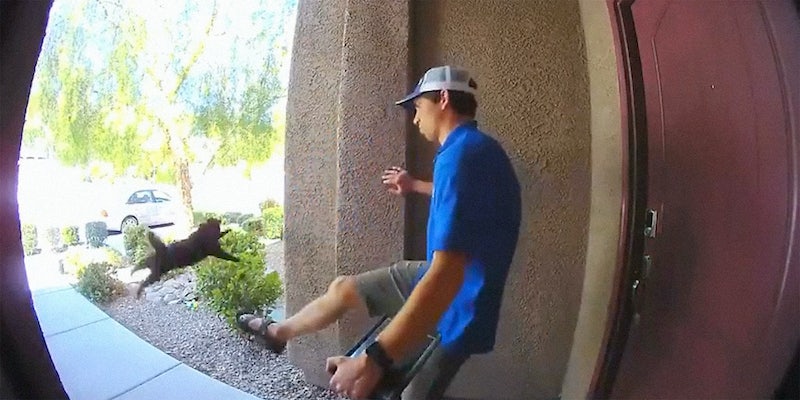 The man seemingly looks around to see if anyone’s watching before kicking the cat.

A Ring camera caught a pest control salesman kicking a cat off of a porch in Las Vegas, prompting outrage across social media.

According to the timestamp on the video, the incident occurred on May 25. In the clip, the man walks up to the doorstep, seemingly looks around to see if anyone’s watching, and kicks a black cat off of the porch as it was drinking water.

The video was initially posted on Ring’s Neighbors app on June 13, which allows neighbors to share activity in their area. The homeowner said in the post on the app that the “dude who kicked (his) wife’s cat” is a representative with Williams Pest Control. He said he has been working with the company for three weeks to “right this wrong with no progress.”

Twitter user @bookofjonah said he posted the video to Twitter after a friend who lives in the neighborhood sent it to him, clarifying that it took place in the Centennial Hills area. The video was also posted on the r/iamatotalpieceofshit subreddit, garnering backlash on both platforms.

“Did he just walk all the way up just to kick that cat. That guys got more issues than Sports Illustrated,” a Reddit user said.

Additionally, many people have left negative Yelp reviews on the company’s page.

The company addressed the incident as well as rumors surrounding it in a statement on Facebook.

“We know this young man is devastated and know he has done everything Mr. Aguilar has asked him to do over the last 3 weeks,” the company said. “The young man is not my son or an employee of the company but is spending time with me as I’m helping him get back on his feet… We appreciate your understanding and ask for prayers as we get through this very difficult time.”

The company limited comments on the post, and its response was criticized online as well.

“The young man is devastated ?! About being filmed, you mean, because that means there is evidence of what he did,” one Reddit user said. “And prayers for whom ?! Shouldn’t that be prayers for the cat ?”

The Daily Dot has reached out to Williams Pest Control. The cat’s owners could not be reached for comment.