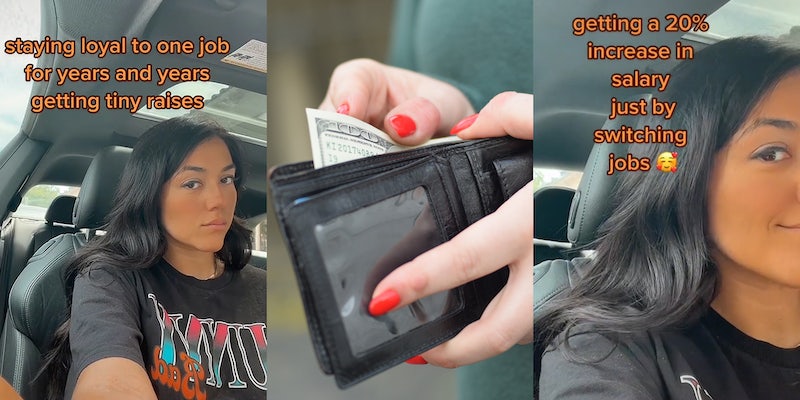 ‘Would’ve taken me years and years to get that staying at one place’: Former tech worker says she got a 20 percent salary increase by switching jobs, sparking discussion on company loyalty

In a viral TikTok video, a woman shared how she received a 20 percent salary increase by changing her job, sparking a debate about job hopping.

The video features user Christen (@chrristen) sitting in her car while the overlay reads, “staying loyal to one job for years and years getting tiny raises.” Then the camera zooms in, a smile on her face as the second part reads, “getting a 20% increase in salary by switching jobs.”

“My salary journey=60k to 150k. would have taken me years and years to get that staying at one place,” she added in the caption.

The video has been viewed over 188,000 times since it was posted on August 4. A discussion ignited in the comments section, some sharing their experiences of working in corporate America.

my salary journey=60k to 150k. would have taken me years and years to get that staying at one place❤️

“yep. left a company I was making 93k at and landed the same role with a different company starting at 145k,” one user shared.

“Yep! Received a 50% pay increase by switching jobs this year,” a third wrote.

“I am an example of this I literally went from a 9 year job to now a huge increase!” another commented.

“21 years of my life getting 3% raises and it took leaving to jump up 20% in salary,” another agreed.

Other people argued in the comments that staying loyal to one job you love can have its perks.

“Staying loyal to one job bc ur team is AMAZING and there is no micromanaging and just love I’ll stay,” one person commented.

“Having a boss that advocates for you is also key. Love where I work and my boss was able to get me promotion & a 25% salary increase,” a second wrote.

“It’s easier to job hop when you don’t have children. When your current job accommodate you, it’s hard to leave,” a third said.

Job hopping has become common recently, especially among the younger generation. According to Gallup, Millenials are most likely to job hop, with 21 percent stating they’ve done so within a year. Half of the millennials claim they will stay with their current job but don’t see a future with them. Another 60 percent reported that they are open to a new job opportunity.