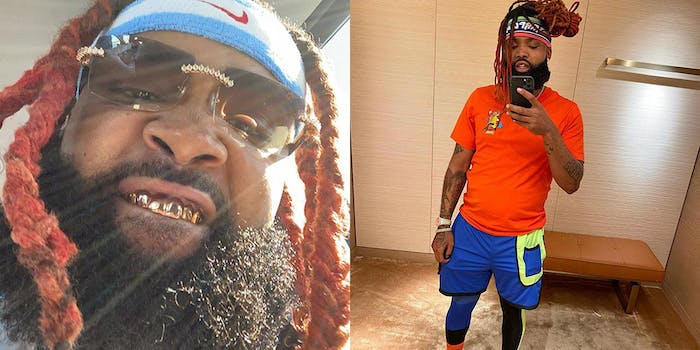 People started looking into his history after he used a gay slur when referring to a Lil Nas X fan page.

Rapper Sada Baby is under fire after his old, offensive tweets were unearthed. In some of the tweets, he wished for Beyoncé’s death and talked about wanting to rape someone.

Sada Baby and Nicki Minaj collaborated on a song that came out on Friday, and when a Lil Nas X fan account asked him to promote the song on Instagram, he commented back, “Suck my d*ck f*ggot a** fan page.”

Once this comment began making its way around social media, people began to unearth numerous problematic tweets from the Detroit rapper. Dating as far back as 2010, the rapper tweeted, “Smh being a f*g should be illegal.” He also tweeted things like, “I hate dark-skinned people” and “I wanna slip #oomf a roofie and rape her a** all night” in 2011.

He also tweeted of Beyoncé when she was pregnant, “I’m tired of Beyoncé that b*tch needs to die or something.”

Sada Baby addressed the resurfacing of the tweets on his Instagram Story Tuesday.

While he promoted his new song with Minaj via Twitter on Oct. 16, he also wrote on Tuesday that he’s “not even logged into (his) twitter and haven’t been for months.”

He refused to apologize for the tweets and instead wrote in an Instagram caption, “FYI @asylumrecords runs my Twitter so y’all tweetin them [and] not me. I don’t have the twitter app on my phone. You gotta understand everybody ain’t removed from who they is. I’m fucked up in the head [cause] that’s how I was raised. God [and] my grandmas the only judges I care for.”

Minaj is also now facing backlash for working with Sada Baby; she has yet to address the controversy.