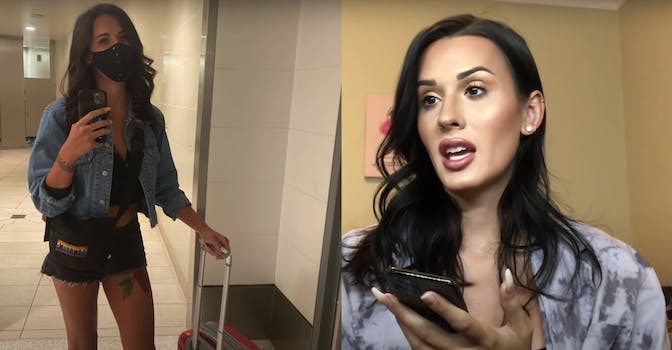 'I felt completely stripped of my humanity.'

After detailing the “anxiety” she feels going through airport security in a March 19 TikTok, a trans content creator spoke directly with Transportation Security Administration (TSA) about its “transphobic” procedures.

Rose Montoya, who has over 490,000 followers on TikTok, documented her “horrible” experience at a TSA checkpoint in a TikTok with over 20 million views. In the video, she says that she “always has immense anxiety leading up to going through security.”

“This being said,” she says. “I totally recognize the privilege of having all of my documents be correct. So, the gender marker on my license, for example, says ‘female.'”

However, she says, there are only male and female scanners at TSA checkpoints. Montoya says she acknowledges her “cis-assuming privilege,” but says she always has “an anomaly” between her legs when she walks through the scanner.

She says she set off the alarm while going through the female-designated scanner, and the officer asked her if she had anything in her pants. Montoya says she said “no” and the officer stated that it must be the “metal buttons” on her shorts.

After the alarm went off during Montoya’s second scan, she says she told the officer she is trans and to pat her down. The officer then asked Montoya if she wanted to “be scanned as a man instead.” Montoya says she did not want to, but “ended up doing it.”

Montoya says her boobs set off the “male” scanner, and she says she “tried to make a joke out of it.” “Don’t worry,” she says. “There’s just a bunch of plastic in there, it’s fine.”

Montoya says the officer stated that she must be patted down and asked Montoya if she wanted “a man to do it,” to which she responded, “absolutely not.”

The video, which has accumulated over 3.4 million likes and 30,000 comments, caught the attention of TSA, which reportedly reached out to talk to Montoya about her experience.

In a YouTube video posted Friday, Montoya documents her conversation with a TSA official. In the beginning of their conversation, Montoya states that this is one of her “better experiences with TSA, unfortunately.”

Montoya said she wishes the officer would have listened to her when she asked to be patted down and said she could have been “just scanned once.” She also said that the TSA spokesperson told her that the scanners are gendered and they use “binary technology.”

TSA, which did not immediately respond to the Daily Dot’s request for comment, told Montoya that it’s “unable to make any commitments towards change,” Montoya wrote in an email.

Montoya told the Daily Dot that she passed on suggestions to the spokeswoman and has received thousands of messages from people who have faced “similar discrimination” while going through TSA “because their bodies don’t align with what the scanners are designed to scan for.”

“This includes but is not limited to to trans people, intersex people, people who are not skinny, people with thicker/curlier hair, people with extra skin, people with disabilities, etc.,” she wrote. “I hope that my story serves as a reminder to all people especially the transgender community that you should stand up for what’s right and stand up for yourself.”

Update 8:43am CT, March 30: A TSA spokesperson tells the Daily Dot that “TSA recognizes the concerns of transgender/gender diverse passengers with the security screening process. We are committed to ensuring every traveler is treated with respect and courtesy. We train all our officers in best practices in engaging with transgender/gender diverse passengers with a required gender diversity awareness training. We continually collaborate with LGBTQX advocacy groups to develop training tools and refine screening protocols.”