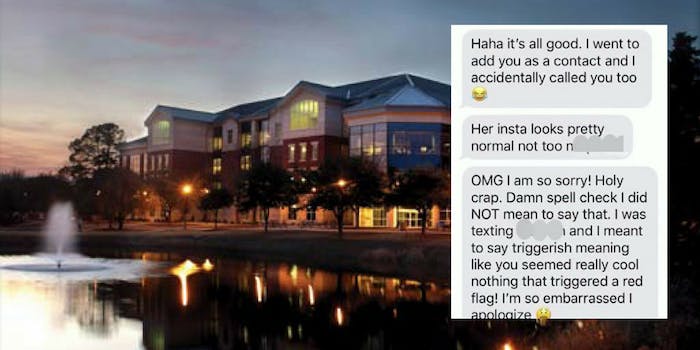 Um, that is now how autocorrect works.

Georgia Southern University has denounced a white student’s behavior after the student “accidentally” texted a racial slur to her roommate and blamed her actions on her phone’s autocorrect feature.

According to BuzzFeed News, screenshots of the exchange between two GSU students, which have since gone viral, show the target of the slur, a Black student, introducing herself to her new roommate. She wrote, “Hey [redacted]! My name is [redacted] I wanted to introduce myself since I am going be [sic] your new roommate.”

“Hey!! Did you just call me? So sorry lol my phone is on silent,” the white roommate responded.

The recipient then apologized, saying the call was an accident. The white roommate then said she also tried to call the other person on accident. Then, minutes later, she texted, “Her insta looks pretty normal not too n*****ish.”

After the offending text, the white roommate blamed autocorrect for the slur.

“Damn spell check I did NOT mean to say that. I was texting Hannah and I meant to say triggerish meaning that you seemed really cool nothing that triggered a red flag!” she wrote.

According to WSAV3, a friend of the student targeted with the slur, Dajah Morrison, posted screenshots to Facebook and pointed out that “n*****ish” is not a real word that autocorrect would use.

Speaking to the university paper George-Anne, Morrison said she found out about the texts from a private Twitter group, and said she tried to help by using her platform. Prior to deleting the post, it had received more than 500 shares and hundreds of comments.

“I believe the Black community needs reassurance that there’s zero tolerance for hate speech, racism and prejudice,” Morrison said. “There’s been a history of these situations here at the university, so it would be lovely to hear that our administration is accepting and tolerant to all.”

In a statement released Friday, the university condemned the student’s action. The university has not confirmed the identities of the two students, nor if either will be leaving before the upcoming semester.

“The use of such racist comments is offensive and unacceptable and in no way reflects the attitudes or values of Georgia Southern University,” the statement read.

Correction: In a previous version, Georgia Southern University was misnamed in the lede. We regret the error.