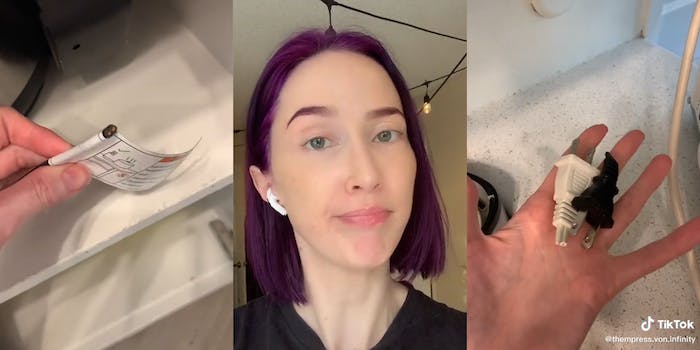 'Damn that's hella mature and I respect it.'

In February, a TikToker went viral after claiming their roommate attempted to poison them by exposing them to an airborne food allergen “because she was mad.” Now, viewers have an update on the story: The roommate allegedly moved out, but not before cutting several power cords in user Von’s (@thempress.von.infinity) apartment.

“My roommate… exposed me to one of my airborne food allergens on purpose because she was mad,” Von shares. “Yes, she was completely aware of it. Yes, she had agreed never to bring said food allergen into the house. She did it deliberately to ‘assert dominance’ in a situation.”

In the text overlay on the video, Von says they had to go to the hospital because of this incident.

On March 23, Von provided viewers with more information about their current situation.

“Update on the roommate who poisoned me: She finally moved out yesterday, but not before causing at least $1,000 in property damage,” Von details.

As the video progresses, Von reveals they suspected the roommate might try to do something like this and monitored her move-out.

However, at one point, Von says they had to take a private call. During this 10-minute window, their roommate allegedly snipped several appliance power cables.

Von also claims they have a restraining order against the ex-roommate and called this action a violation of this order. However, when police arrived, Von says they said there was nothing they could do as Von did not actually see the action take place.

Von later clarified in comments that their $1,000 damage assessment was not simply related to the cables.

“I am aware that I can fix the power cords. Already knew that,” Von wrote. “She damaged the apartment itself, smashed my car window, and assaulted me twice.”

Von says they will not expose the roommate, however. In another video, Von addresses why.

“When y’all are hearing about this, you’re probably picturing a white woman with ‘can I talk to the manager’ hair,” they start. “But the reality is that she is a Black woman and an immigrant… I am not willing to put a Black woman on blast for behaving badly—not because I owe it to her, but because I know that the wrong people on the internet are going to find that and are going to point to her and say, ‘Look! See? We’ve been saying all along that Black women are [groaning noise].”

In comments, users commended Von for their handling of the situation.

“Damn that’s Hella mature and I respect it,” one lauded.

“You are a better person,” a user wrote. “Also you went about it the right way.”

“You don’t owe anyone any single thing. Protect yourself,” another added.

Some criticized the police’s alleged response.

“The point is not whether or not [the cables] can be fixed, it’s that she did it, and that the police did nothing,” a TikToker commented.

“Coming from someone who’s been in a similar circumstance, the police will not believe you unless you have actual video footage, even if you did see it,” another user shared. Von alleged in response that they had evidence of their roommate assaulting them, which still resulted in zero action.

For now, Von says in comments that they are trying to turn their restraining order into a “stay-away” order.

Update 7:22am CT, April 12: When reached for comment, Von gave the Daily Dot photographic evidence of the restraining order.

“The restraining order is already a stay away now that she has moved out. It’s not possible to get a stay away order against a roommate under any circumstances, which is a terrible law, so the judge wrote into the RO that it would become a stay away order after she left,” they said.

However, Von isn’t sure that this will change anything.

“I don’t have a lot of confidence in the police enforcing it,” they said. “Also, my building manager has explicitly told me she won’t call the police if she sees the roommate. She has been very annoyed by the whole situation, and has retaliated against me for inconveniencing her.”