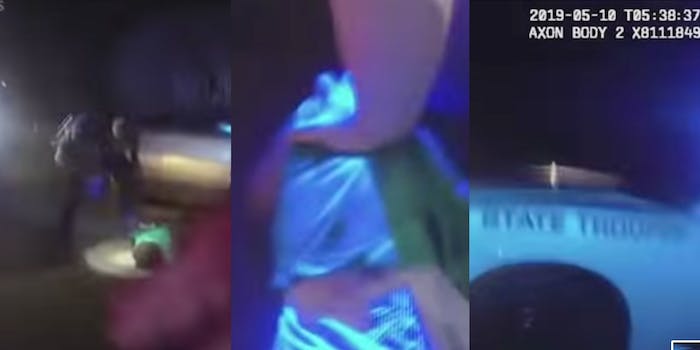 Body camera footage obtained by the Associated Press shows Ronald Greene apologizing as he is killed by Louisiana state troopers.

In 2019, Greene was reported to have died during a car chase with Louisiana state troopers outside of Monroe, Louisiana. Then, according to the AP, troopers released a statement saying that Greene had “struggled with troopers,” and died en route to the hospital.

The case is the current subject of a federal civil rights investigation, AL.com reports. Most body camera footage is released immediately, but in the case of Greene, it was withheld for two years. Similarly, top brass in the state police did not open an administrative investigation until 474 days after the incident.

In that time, accusations of a cover-up have been hurled at the Louisiana state troopers. The AP reports that Greene’s family was initially told he had died on impact after crashing.

But the video originated from the body camera of Louisiana state trooper Dakota DeMoss shows Greene being stunned, punched, and dragged after being restrained. According to the AP, officers waited 9 minutes to render aid.

On Wednesday, Greene’s mother Mona Hardin told the AP that “he didn’t have a chance.”

Greene’s family has filed a wrongful death lawsuit, claiming he was brutalized by police, and that his death was “covered up.”

A medical report was also obtained by the AP wherein an emergency room doctor compared Greene’s injuries with the events recounted by law enforcement. It cast doubt over law enforcement’s version of events.

“Does not add up,” the doctor wrote in the report, according to the AP.

Louisiana state police declined to comment to the AP regarding the video’s contents but did give a statement regarding its release.

“Premature public release of investigative files and video evidence in this case is not authorized and … undermines the investigative process and compromises the fair and impartial outcome,” was the statement given to the AP.

The Daily Dot has reached out to the Louisiana state police.