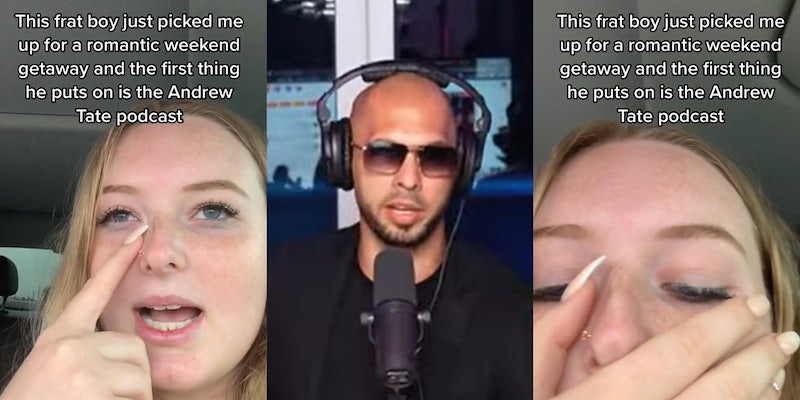 ‘Should I call my mom and tell her to drive 2 hours to come pick me up’: Woman films date talking about Andrew Tate

'It's the guys you least expect that are into Tate. So please ask them before you hop in that car.'

A TikToker posted a video of a man she was on a “romantic weekend getaway” with showing her Andrew Tate’s podcast. Tate, a social media personality and former reality TV contestant, has been banned from social media platforms like TikTok, Instagram, and Facebook for his extremely misogynistic and violent rhetoric.

TikToker @nudlemommy, who goes by Nudle on TikTok and Twitter, posted a video of herself in the car with a man, whom she calls a “frat boy,” as he plays Tate’s podcast for her on their “romantic weekend getaway.” In the video, the man tells her Tate talks about “the standard of relationships and how they should be and like how men and women should be in relationships and in society.”

“You’re getting on a plane and this plane is gonna fly through a hurricane, right?” Tate says on his podcast in Nudle’s TikTok. “Do you want a male pilot or a female pilot?”

In the video’s caption, Nudle wrote “should I call my mom and tell her to drive 2 hours to come pick me up.” On Tuesday, her video had almost 3.5 million views.

In a follow-up TikTok, Nudle confirms that she is “safe” and that the man drove her home. She says she knew him before they planned their weekend together but that she didn’t know he was into Tate.

“It’s the guys you least expect that are into [Tate],” Nudle says in her follow-up TikTok. “So please ask them before you hop in that car.”

Commenters on Nudle’s viral video were worried about her safety given Tate’s history of moving to Romania because the country’s laws and culture around sexual assault and rape are more “relaxed,” as reported by Insider, and many asked her for her to let them know she was all right.

“Are you okay???” @ganseysjournal commented. “Being alone in a car with a person like that would terrify me.”

“It’s totally OK to just immediately get out of the car,” @fluffmanor wrote.

Commenters on Nudle’s follow up video talked about finding out that people in their lives followed Tate on social media—and lamented that after Tate’s been banned from platforms, it’s more difficult to know who supports him.

“I went to Andrew [Tate’s] Instagram page before he was banned to see who I followed that followed him,” @ryleemcduffie commented. “I was so disappointed.”

“The only downside to [Tate’s] socials being down is that I can’t check if someone follows him,” @millennialmell wrote.

The Daily Dot has reached out to Nudle via Twitter.