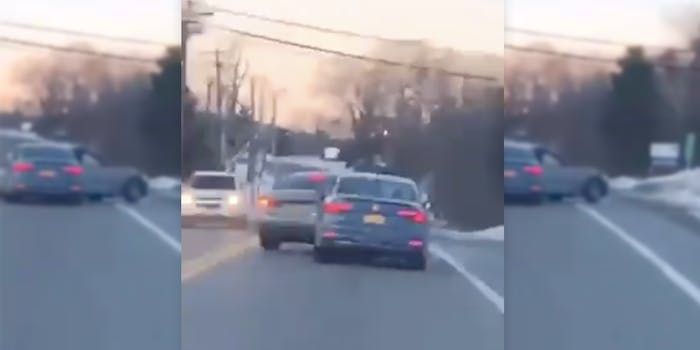 The shooting was found to be an intended shootout, not random, police say.

A roadside shooting in Canton, Massachusetts was caught on camera Sunday, and police say it wasn’t random, according to an NBC station in Boston.

The video uploaded to Twitter by @davenewworld_2 shows what seems like a classic case of road rage.

A gray car is seen bumping a blue one in an on-the-road confrontation, causing it to swerve and slip onto nearby snow. A person gets out of the gray vehicle, runs, and begins firing shots toward the blue one right before the video ends.

The shootout was not a random act, but an intended shooting local Police Chief Ken Berkowitz told 10Boston.

“Criminals are more mobile — more guns available and unfortunately more people are willing to use them,” Berkowits told local media.

The local news station also reported that everyone eventually fled the scene and that both cars were found to be rentals abandoned in separate locations in town.

Police say they’ve identified the suspects, but no one has been arrested.