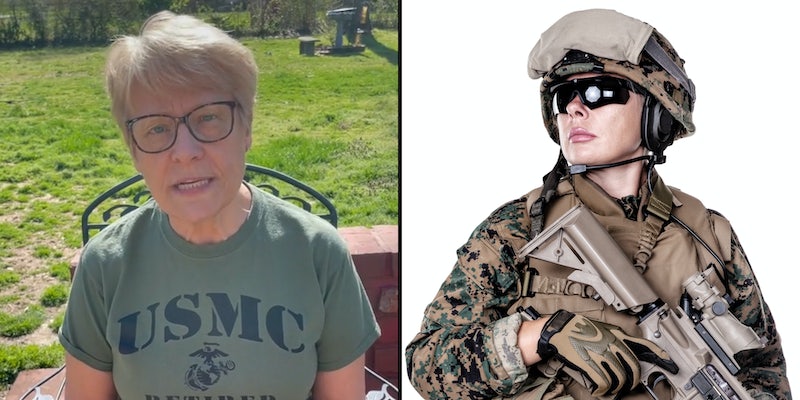 ‘Not all GIs are Joes’: Retired Marine calls attention to misogyny she’s faced as a female veteran

Posted by Whitney Frost (@dubfrost), the video shows her mother, user @nataliesnana sitting in a patio chair, wearing a “USMC Retired” shirt and holding a Marine Corps tumbler. @nataliesnana asks viewers if they know that “women can be Marines too.”

She shared her experiences with being dismissed as a veteran based on her gender. “For example, when you park at Lowe’s by the sign that says ‘Veterans only,’ and you get out and two or three guys come on over and tell you that it’s not for you, it’s for your husband,” she says. “By the way, my husband was not in the military. He is a civilian. “USMC retired” on my t-shirt that I wear sometimes, and this is the question I get, ‘oh was your husband a Marine?'”

She said that even in receiving benefits from the Department of Veteran’s Affairs, the wrong assumption has been made. “One of my favorites just recently, I got a telephone call from the VA,” she says. “I was scheduled for surgery in two days, so they were calling to discuss that with me. The nurse that called asked to speak with Mr. Hayes. I said well, this is Mrs. Hayes, can I help you? And she said, ‘I want to speak with Mr. Hayes,’ and she was kind of snarky about it. And I said well, would you like to speak with Mr. Hayes, or the veteran? Dead silence. Then I told her, women are veterans too.”

The misogyny also extends to fellow service members, according to the Frost family. “I was a Marine Colonel after so many years, they actually promoted me,” she says.

“I was good with that. So I’m standing in line at the base exchange, or the BX, and this old retired dude was standing in front of me, and he turned around and saw me standing there in my camouflage with my eagles on my collar, and he said, ‘What do you do in the Marine Corps?’ I said, ‘Well, I’m the G1 of the second Marine division’ and he goes, ‘Oh hell no, women are not in the division.’ I said well, I guess (they are). He said, ‘Honey, do you even know which side of the gun the bullet comes out of?'” She said in this particular instance, her son was present to “take up” for her.

The assumption that they themselves have not served is not the only way female veterans experience misogyny. According to the 2021 Rand Arroyo Center report, “Sexual Harassment and Gender Discrimination in the Active-Component Army: Variation in Most Serious Event Characteristics by Gender and Installation Risk,” female soldiers experience frequent sexual harassment from other service members, with 48% of female soldiers saying that these exchanges came from a supervisor or someone else in their chain of command. Female soldiers also experience more gender discrimination than their male counterparts while in service, according to the study.

Commenters empathized with the misogyny she has experienced as a retired service member and throughout her career. Others shared that they had the exact same problem, with their husbands assumed to be veterans.

“Thank you for your service Colonel!” one commenter wrote. “Female veteran here with a civilian husband as well. I feel your story, it happens all the time! The VA [though]?”

“YES! I’m the veteran and everyone thanks my husband for his service,” another commenter wrote.

“I went to buy a car and asked if they gave a military discount,” a commenter wrote. “Salesman asked if my husband served. I told him I wasn’t married and walked out.”

The Daily Dot has reached out to @dub_frost via Instagram direct message for comment on the video.