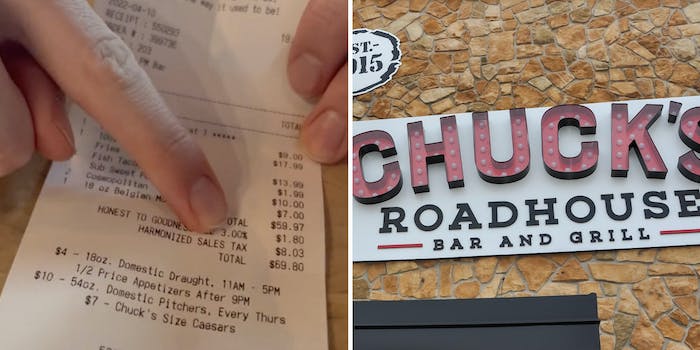 'I'd never eat there again.'

A viral clip featuring how a Canadian restaurant charges an “honest to goodness fee” of 3% is surprising some TikTokers.

The TikTok was posted on April 10 by Jaylin (@jaylbayl). The clip zooms in on her receipt from Chuck’s Roadhouse Bar and Grill, which shows a subtotal of $59.97. Added on by the restaurant is $1.80 for the “honest to goodness fee” and $8.03 for “harmonized sales tax.”

As of Monday, the TikTok has over 1.2 million views.

In the comments section, people criticized the restaurant for its fees. “This is comedic gold,” one person wrote.

According to the restaurant’s website, the “honest to goodness fee” is added to keep food quality high and prices low. “Don’t panic! It’s really not a lot, especially with the great quality we provide,” it claimed. For example, the restaurant noted that for a $7 burger, the fee would make it $7.21.

CTV News asked diners if they minded the fee, and some said they don’t, especially when “it is done transparently.” Others told the outlet they’d prefer the individual food items just be priced higher and forgo the fee. One patron called it “confusing” and a food economist called it “a little disingenuous.”

As for the harmonized sales tax (HST), that’s a consumption tax that “harmonizes,” aka combines, Canada’s federal goods and services tax with provincial sales taxes. In Ontario, where the restaurant is located, the HST tax rate is reportedly 13%.

Chuck’s Roadhouse Bar and Grill’s vice president told CTV News the fee helps the restaurant “remain one of the most competitively priced full service restaurant chains in the hospitality industry” and that the fee hasn’t changed since the franchise opened in 2015.

The Daily Dot reached out to Jaylin via TikTok comment as well as Instagram direct message and to Chuck’s Roadhouse Bar and Grill via email.