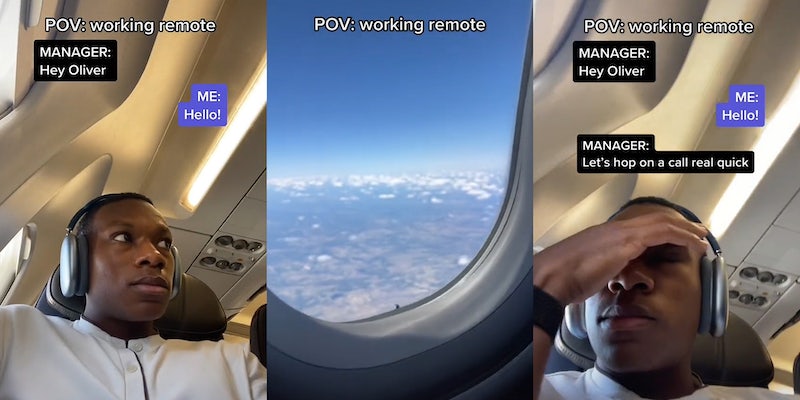 ‘Use that virtual background’: Remote worker jokes about being called into video meeting while he’s on plane

A worker joked about being called into an in-person meeting while on a plane. While the video was intended to be a joke, many viewers resonated with it.

This video received over 170,000 views, with many viewers giving Oliver suggestions on what to do. “Use that virtual background,” one urged.

“My go to: ‘Yeah, I have had a busy on camera morning so far, I’m gonna co camera off,'” another suggested.

“HR here, was this recorded on your break,” one asked, to which Oliver responded by clarifying the video was a joke.

While the trend of remote working and travel has been one to joke about, it is a reality for some. Another worker went viral for a similar video in which they said they got a meeting invite added to their calendar while on a plane, headed to Charlotte. And, according to Startup Bonsai, 69% of remote workers admitted to working and traveling.

We reached out to Sims via Instagram direct message.