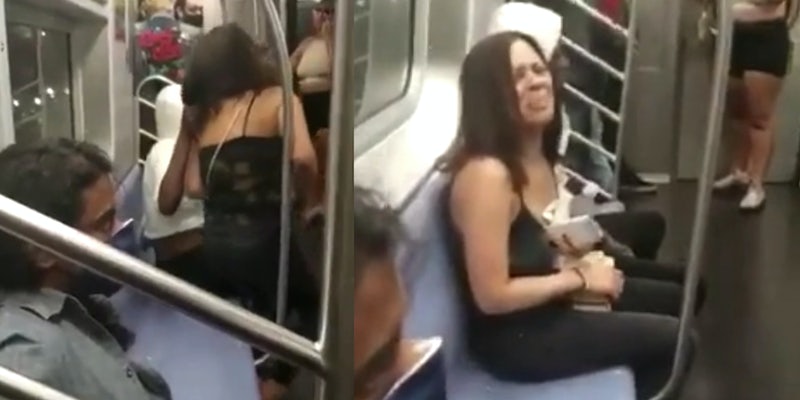 'If you live in NY long enough, you know not to intervene'

There is growing apprehension to ride the subway in New York City due to what seems like a spike in crime on public transit.

On May 25, Reddit user u/riverdale-74 posted a video of a violent attack on the subway to the r/crimeinnyc thread.

In the video, a person can be seen storming around the train car while screaming expletives. The person then sits down. As other passengers move away from them, the person grabs the woman closest to them by the hair and pulls them back down to sit next to them. The woman, who appears to be crying, asked the other passengers for help. Eventually, the person moves away from the woman to kick the window of the train.

According to recent reports from the New York Times, “Major felony crime on buses and subways represents just 2 percent of overall city crime, the same level as before the pandemic, but ridership is 40 percent lower.”

Many commenters empathized with the victim of the attack.

One said, “My heart jumped into my throat when they grabbed that poor woman’s hair.”

“I thought she was with him for a second that’s how nuts he was, I couldnt believe that poor woman was probably just frozen with fear in that moment,” reads another.

While some users were baffled that onlookers failed to take action, one user encourages bystanders not to get involved: “If you live in NY long enough, you know not to intervene. You’ve seen people get invovled, and you’ve seen it go wrong. There’s always a nutcase pulling some shit like this. The subway has been like this as long as I can remember. What if he pulls out a weapon? Is you getting your face sliced worth getting involved?”