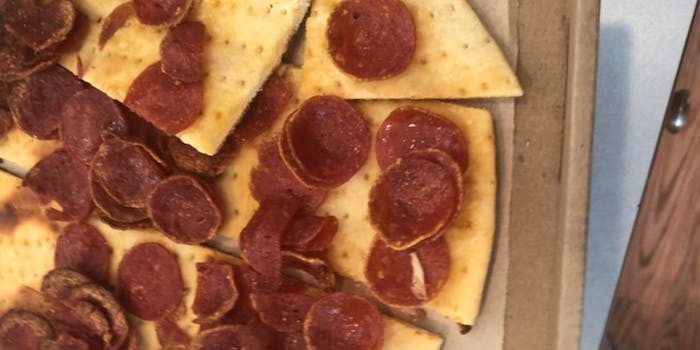 ‘If depression turned into a pizza, it would very much look like this.’

Burger giant Red Robin is now selling pizzas as part of its new partnership with Donatos Pizza. But some consumers say the pies aren’t worth the hype.

“I didn’t notice it until I got home from curbside pickup,” he captioned a photo of a plain crust with pepperonis stacked on top.

The user didn’t specify which location he bought the pizza from, so the post might be a fluke. A Red Robin spokesperson did not immediately answer The Daily Dot’s request for comment.

Donatos and Red Robin partnered in June 2018, according to a press release. And as part of an “aggressive market expansion plan,” it said, Red Robin will add Donatos pizza to 120 additional restaurants by the end of this year—bringing it to a total of 200 locations.

“Overpriced mediocrity is the only thing they serve,” said another.

“If depression turned into a pizza, it would very much look like this,” said a third.

Responding to a separate post, though, @CongressmanCoolRick explains that the error was his own fault. “In my defense, Red Robin makes you click to expand the customization options in the confirmation screen for each item,” he said. “I double checked the burger orders but just scanned over the pizza part because, honestly how messed up can a pizza get right?

He continued: “Just a funny moment opening that box is all, not on some crusade here.”