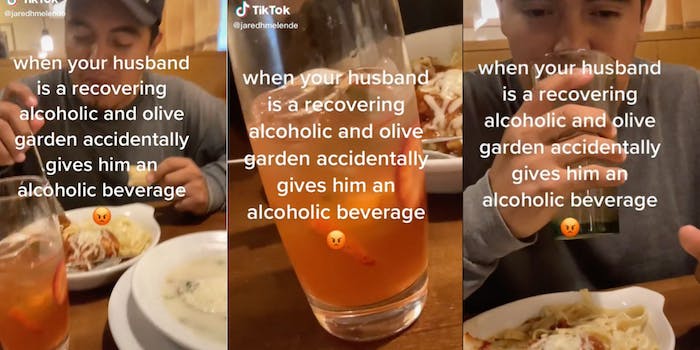 Viewers are divided over who's at fault for the mix-up.

A TikToker claimed recently that Olive Garden gave her husband—who is a recovering alcoholic—an alcoholic beverage by mistake.

In the video, posted by user @jaredhmelende, her husband is sitting across the table with the drink in front of him. @jaredhmelende said that her husband attempted to order a strawberry lemonade but that the restaurant assumed he wanted alcohol in it.

The video has been viewed over 4 million times since being posted a week ago. At first blush, it appeared that most commenters weren’t too sympathetic to the couple because it looked like the husband had already drunk half of the beverage.

“He should’ve been able to smell it or taste it off the first sip and sent it back,” wrote one commenter. “Not drink half the cup.”

In a follow-up video, however, @jaredhmelende explained that the cup was half empty because several people at her table—including herself and her daughter—had taken sips of the drink because they were under the impression it was non-alcoholic. She also admitted, though, that she didn’t look at the menu before ordering drinks for her table.

After her husband noted that the drink “tasted funny,” she said he asked their server whether the drink was alcoholic. The server later brought the table a non-alcoholic version of the drink.

It did appear like some commenters understood @jaredhmelende’s frustration with her Olive Garden experience. But others weren’t buying that her story was legit.

“Idk why people say it’s no big issue when it is,” wrote one person. “A single taste for an alcoholic can change everything especially if they ordered a NON alcoholic drink.”

“As a person working in the restaurant industry for over 23 years, this is 100% unacceptable!” said another commenter. “They should be serving NA bev in diff glasses!”

“They say on the menu that they have alcohol. Reading comprehension isn’t your thing, huh?” wrote a third person.

“It’s not the server’s job to know who is a recovering alcoholic,” said a fourth person. “It’s your job to look at the menu.”

The Daily Dot has reached out to a spokesperson for Olive Garden and @jaredhmelende via TikTok comment.