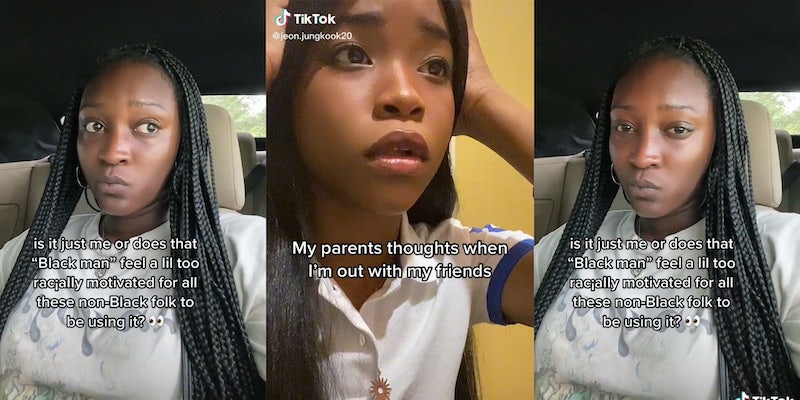 A TikTok sound that talks about women “sleeping with Black men in exchange for marijuana” is facing backlash for its blatant racism.

The sound, which was created by a TikTok account (@gangaffiliation88) that no longer exists, has been used in over 1,300 TikToks. The sound’s “joke” is that when they don’t know where a woman is, some worry that she might be “sleeping with Black men in exchange for marijuana.”

TikToker Jordan Simone, who has called out other racist TikTok trends before, made a video using the TikTok sound in August. In it, she asks, “Is it me or does that ‘Black men’ feel a little too racially motivated for all these non-Black folk to be using it?”

Many in the comments of Simone’s video agreed with her: “It’s definitely motivated,” @josieoioioi commented. “It’s not just you, it’s extremely racially motivated,” @ms.bingb0ng wrote. “They use a new racist sound every month,” @purplesprite11 commented.

The TikTok sound is blatantly racist because it implies that Black men sell marijuana. Bans on weed have a particularly racist history. According to the ACLU, “Black people are still more likely to be arrested for marijuana possession than white people in every state,” even in states that have legalized weed. What’s more, Black people are arrested for “violating marijuana possession laws” almost four times as often as white people.

So any TikTok sound that implies that Black men sell, deal, or possess weed is racist—and super tone-deaf.

Plus, the implication that Black men either entice women to sleep with them using marijuana or just give marijuana to those that have sex with them is racist, too, and contributes to the oversexualization of Black men.

The sound is problematic all around and highlights a dark side of TikTok: Bigotry can be played off as a “joke” in the form of a TikTok audio.