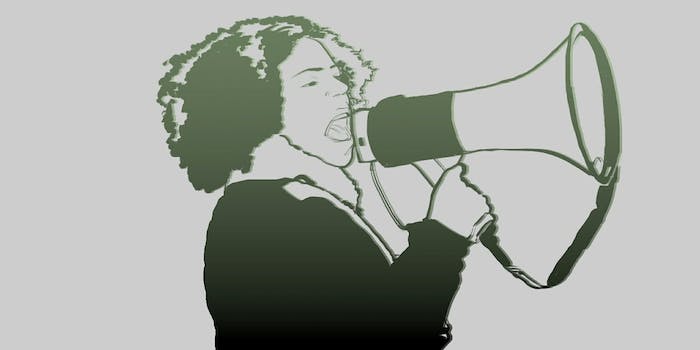 How #TrustBlackWomen pushes back against racially-motivated anti-abortion activism

The campaign addresses rumors that black women commit "genocide" by having abortions.

A group of women gathered in Atlanta want you to Trust Black Women.

This week, more than 60 Black women activists and community leaders met to discuss reproductive justice and about how to deal with the increasingly manipulative tactics of an anti-abortion movement aimed at Black communities. The women, representing a variety of nonprofits and other groups, are relaunching the Trust Black Women coalition as a nationwide reproductive rights movement.

"I believe that #reprojustice is the way for human rights for Black women and girls." – @duxfemfac #TrustBlackWomen

"When they're saying don't trust Black women, it means they don't trust any women" #TrustBlackWomen

"Racism and structural oppression have an impact on the health of Black women and our families." http://t.co/3XSRmasXUH #trustblackwomen

Why Trust Black Women? The name stems from a 2010 response to a series of billboards targeting Black women which referred to abortion as “black genocide.” That year, anti-abortion billboards appeared in places like Georgia, Texas, Illinois, and California with advertising that compared abortion to slavery. The Atlanta-based organization SisterSong reacted by forming a quick coalition which successfully pressured the owners of the billboards to reject the ads.

Now, #TrustBlackWomen is an online and IRL movement committed to putting Black women at the center of reproductive healthcare issues that affect their bodies and families. The coalition seeks to play defense to racially-motivated anti-abortion marketing, as well as continue to build a reproductive justice movement where Black women are on the front lines. Additionally, these activists want to make sure that reproductive rights remains on the agenda in the work of Black Lives Matter.

“The fact is that issues of racism and structural oppression have an impact on the health of Black women and our families,” said Monica Simpson, executive director of SisterSong, in a statement. “We are often shamed when we decide to seek an abortion and also denied support and access to the health care we need to become parents and raise our children. We see it in the political agenda to deny reproductive autonomy to women of color and the high rate of maternal mortality among Black women.”

Over the past decade, the anti-abortion movement has increasingly swung marketing towards Black communities and claimed that women’s health clinics are deliberately placed there in order to perform an outsize amount of abortions and thus eradicate the race. In a 2009 article on the blog Religion Dispatches, journalist Kathryn Joyce revealed that anti-abortion activists had begun leafletting inner-city, mostly Black neighborhoods with flyers intended to incite opposition to “Klan Parenthood.” Other marketing materials invoked slavery and the 13th Amendment when referencing abortion, while others called Black babies an “endangered species.” In a July Ebony op-ed, Simpson called a recent spate of billboards placed by Pro-Life Across America “an assault on Black women’s reproductive freedom.” 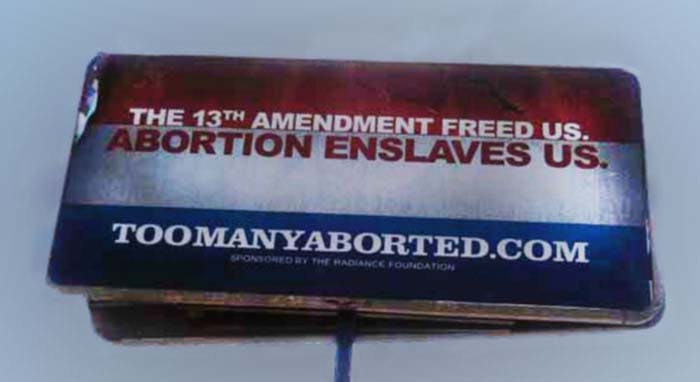 “I see these tactics for what they are—offensive, cultural appropriation and manipulation,” said Jamia Wilson, executive director of WAM! (Women, Action and the Media) in an email to the Daily Dot. “Leveraging slavery’s legacy as a tool to advance a political agenda is harmful and disingenuous. Exploiting Black suffering and pain for political gain undermines both our collective struggles for equality, and liberation.”

According to Clenard Childress, a pastor who runs the anti-abortion organization L.E.A.R.N. and its campaign website BlackGenocide.org, “The most dangerous place for an African-American in inside the womb.” Childress is one of many anti-abortion activists inspired by statistics that show the rate of abortion among Black women is five times that of white women. But what’s left out of the “black genocide” claims is that Black women also have the highest rates of unintended pregnancy, according to the Guttmacher Institute. These pregnancies, pro-choice activists note, can be traced to things like the chaos of poverty, and to lower access to health care and contraception.

“Now more than ever Black women must come together to ensure access to reproductive healthcare,” said Simpson in the SisterSong statement. “And to get rid of the obstacles that impede our ability to live our lives with dignity and to raise our children to be not just safe, but to be happy and healthy and empowered. We are struggling, but we are also striving to get by in a world that far too often wants to push us down.”