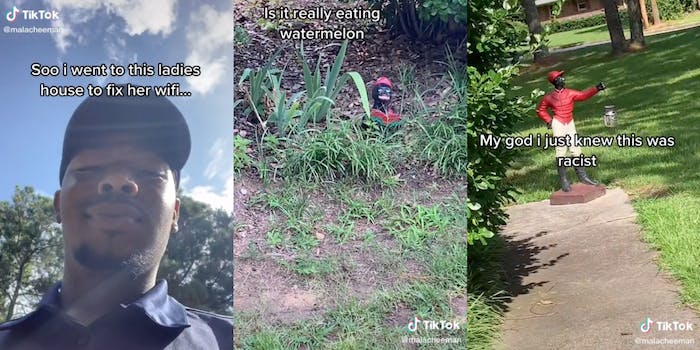 ‘I just knew this was racist’: Black internet service worker called to house with minstrel statues in viral TikTok

'Is it really eating watermelon?'

A viral TikTok shows a Black internet service worker called to a house with minstrel statues in the Atlanta metro area.

These figures, or coon caricatures, are violently anti-Black. Most of these figurines and statues, according to research by Ferris State University, contained glossy black ‘skin,’ bulging eyes, large red lips, a flat nose, and curly hair. They were meant to portray Black people as imbeciles, wild savages, childish buffoons, lazy deviants of sexual or criminal nature, or big-grinned servants.

Posted by @malacheeman, the video has over 3 million views. He’s a young Black man answering a house call to fix a woman’s internet service. The voiceover narration explains, “I went over to this lady’s house to fix her wifi, and I see this.”

He then the quick-pans over to the “lawn jockey,” another figure regarded as anti-Black, near the walkway leading to the front door.

“My God, I just knew this was racist,” the voice says.

In part two, he says, “She offered me coffee, but I watched Get Out too many times.” He’s inside the house, which is a mess.

As the voiceover says his “manager came to save” him, he pans down to a book on the woman’s table called Let Trump Be Trump.

One of the commenters noticed the watermelon coaster, connecting to the minstrel figure outside. Another joked with a Get Out motif: “Good thing you didn’t take the coffee. She probably would’ve hit the spoon against the cup a couple times, and we would’ve never saw you again.”

He jokes in a third video, responding to a comment about the racist woman’s obsession with Black people via the minstrel figurines, “Who wouldn’t wanna be Black? Who wouldn’t want all this chocolate?”