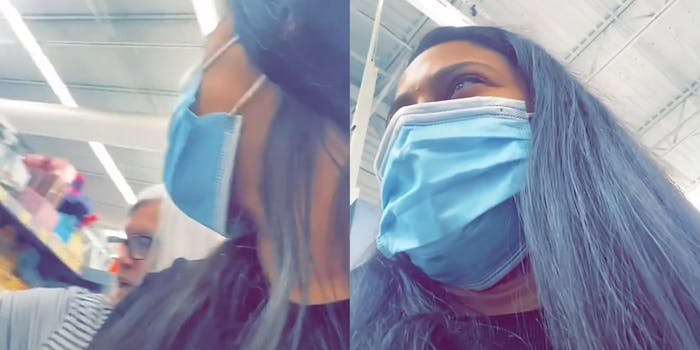 ‘You heard what I called you’: Karen refers to Puerto Rican woman as a ‘Damn Mexican’ at grocery store

She clarified why in follow-up clips.

The 23-second video shows @samanthaleearriaga pushing a grocery cart and turning around to ask a lady behind her, “What did you call me?”

“You heard what I called you,” the lady’s voice responds.

“What did you say?” @sanamanthaleearriaga repeatedly asks until the lady finally repeats what she said.

“I don’t have to repeat it twice… I called you a damn Mexican.”

In two further videos posted yesterday and today respectively, @samanthaleearriaga clarifies that the lady had been yelling at her for putting rice water (which is a non-refrigerated product) back on the shelf rather than in the refrigerator.

Some of the 1,068 commenters thought @samanthaleearriaga was being too sensitive.

“Who started what?!,” responded @samanthaleearriaga.

Others came to her defense and noted how common racism is in the South.

“I work at WALMART in Georgia and hear racist things from customers every day,” said @taylorashlyn02.

“They act like that in Columbia, SC too,” said @bg_foreign.

The Daily Dot reached out to @samanthaleearriaga for comment.