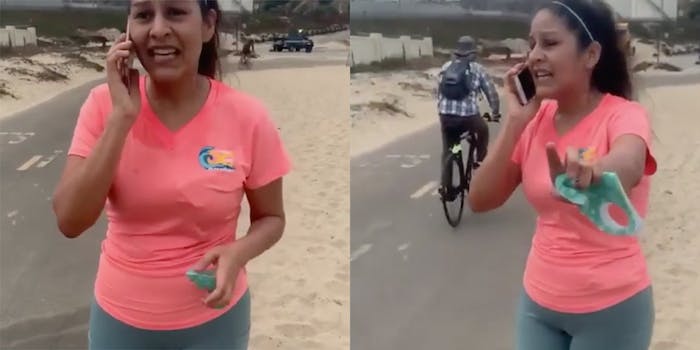 Racist ‘Karen’ calls for ambulance to rescue her from ‘Black African’

'You Africans are so f*cking violent.'

A woman dubbed a “Karen” subjected a Black woman to a racist tirade on a Los Angeles beach on Sunday morning. Part of the encounter was caught on video and posted to Instagram by a user named Brandon Crockett, who said his sister Britt filmed the incident.

“Didn’t think this would happen to myself or my own family members—let alone in Manhattan beach—but hey, this year really is full of surprises,” Crockett wrote on the video’s caption. “While my sister was out on a run this morning, a woman shouted at her, calling her all sorts of [N-word] and African and…well you can just watch the videos.”

The woman seen in the video says she’s calling the police because Britt had “accosted” her. The woman does not appear to be physically injured, though, and shouts racist insults at Britt.

“You guys are so violent,” the woman says. “You Africans are so fucking violent. You’re an African, right? I’m trying to get a description.”

The woman does not appear to be white but still embodies the “Karen” stereotype by claiming to be a victim while spouting racism. She also holds a mask in her hand but isn’t wearing one on her face.

“This woman is a Karen,” Britt says to others jogging and biking by. “She called me the N-word.”

The video shows the woman continuing to yell as she walks further down the bike trail, calling Britt a “Black African” and to “stay the fuck away” from her. After Britt calls her ignorant, the woman retorts that she’s actually very “cognizant.”

As the situation escalates, the woman, apparently still on the phone with the police, demands an ambulance come to the beach and rescue her. She claims she was harmed by the environment that “this African” had created.

Before and after calling for an ambulance, the woman yells, “Black lives, Black lives” and points her index finger at Britt.

Midway through the video, Britt notes to a passerby that she was recording the video to document an example of racism. Britt did not immediately respond to the Daily Dot’s request for comment.

“Point is man, I’ve had enough,” Crockett wrote. “I’ve had enough of seeing my own people being accosted in the middle of their daily activities for quite literally, just being black.”