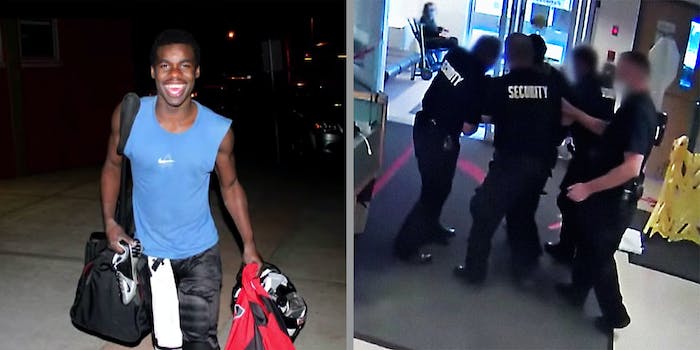 ‘Nobody cared because of who he is’: Black student dies by suicide after hospital refuses to help him

'If someone had a different skin tone and they were sitting there, they would have helped.'

A video shows a Black student-athlete seeking help during a mental health crisis at a hospital and being thrown out by security guards. According to reports, his body was found in a lake 20 hours later.

Samwel Uko, 20, was found dead of apparent suicide in Canada’s Wascana Lake on May 21, 2020, after visiting Regina General Hospital twice in one day and being denied care.

In a Snapchat of Uko at the hospital, he repeats, “I need help, bro,” while security officers are seen standing nearby.

The athlete played football for the Saskatchewan Huskies and was in Regina to visit a family member.

According to the CBC, Uko first visited the hospital that morning and was seen by a healthcare professional who released him and referred him to a mental health clinic. Later that day, Uko went to the police for help, and they escorted him back to the emergency room where he was then removed by security guards.

While the guards drag him out the door, he is heard begging: “Leave me.”

Uko’s family members, who are Sudanese immigrants, have since come forward and accused the hospital and the Saskatchewan Health Authority (SHA) of being racist, thus denying him care and resulting in his death.

“They didn’t care because it’s Black people,” Uko’s mother Joice Bakando told the Daily Beast. “I know my son. He doesn’t talk bad to people. He’s very, very nice… all the time, when I’m sleeping, I’m thinking of my son.”

The SHA acknowledged that it failed to provide Uko with “timely assistance” but denied any discrimination.

Uko’s family was awarded $81,000 in damages by the SHA following a civil suit, according to the CBC.

“If someone had a different skin tone and they were sitting there, they would have helped. It’s not something we want to debate, or talk about, it’s just reality,” Uko’s uncle Justin Nyee told the Daily Beast. “The doctors there didn’t care, the nurses didn’t care, nobody cared because of who he is.

“Canada racism is covert racism,” Nyee continued. “And this is an example of that.”

Uko’s official cause of death is yet to be confirmed as an investigation is underway, but a coroner’s inquest is set to take place in Regina beginning Sept. 20, reports the CBC.

Update 11:54am CT, July 12: In a statement to the Daily Dot, the Saskatchewan Health Authority said it’s “deeply sorry about the events that transpired around the passing of Samwel Uko.” The authority also directed the Daily Dot to its public apology to Uko’s family issued in summer 2020.