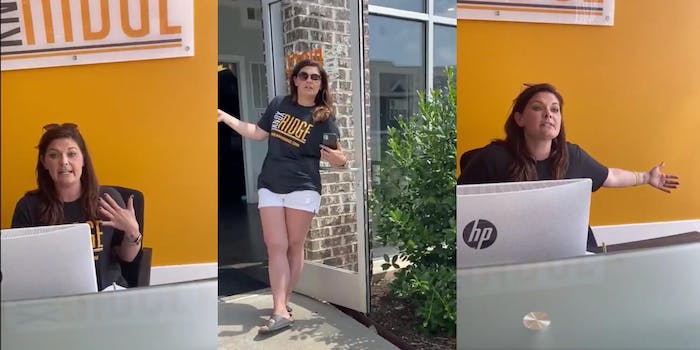 Apartment Karen was placed on disciplinary leave after the video went viral.

Here we go again. Another Karen was spotted making life unnecessarily difficult for a Black person just going about their day.

A white woman at a student apartment complex in Tennessee was placed on disciplinary leave after racially profiling a Black resident and her friends. The exchange—in which Apartment Karen blocks the group from accessing the complex’s swimming pool—was caught in a now-viral video.

The woman continually blocks the Black woman, whose Twitter handle is @royaal_e, and her friends from entering the building while letting a white person walk in, no questions asked.

When @royaal_e points out her obvious bias, the woman claims that she let the person in because she knows “every single person” that lives in the building.

She’d already told Karen her apartment number and that she’s been subleasing and paying rent since March. Since that didn’t make Karen budge, @royaal_e told her to look her name up in the system.

“I do know everybody. Bitch, you haven’t even come in and done your paperwork, right?” Apartment Karen said.

Aside from having the foresight to film the discrimination she faced, @royaal_e also had Karen write down her supervisor’s email so she could file a formal complaint.

The day after the video was posted, the student apartment complex tweeted that Karen was placed on disciplinary leave as it “review this matter further.”

Multiple people called for the complex to not just review the incident but to fire the employee in question.

“That’s not good enough. you saw the way this woman tried to belittle these women by letting others to in no question and not even letting these black women even step foot in the door. fire her,” Twitter user @beesvxx wrote.

One commentor, who said they are a property manager, wrote that not only was this the “#1 thing not to do” but that @royaal_e can sue and likely win.

“This is the biggest lawsuit a property can get, minimum$100k. You can get this without a lawyer, this video is enough proof. My company would have fired me,” @fortney1963 tweeted.