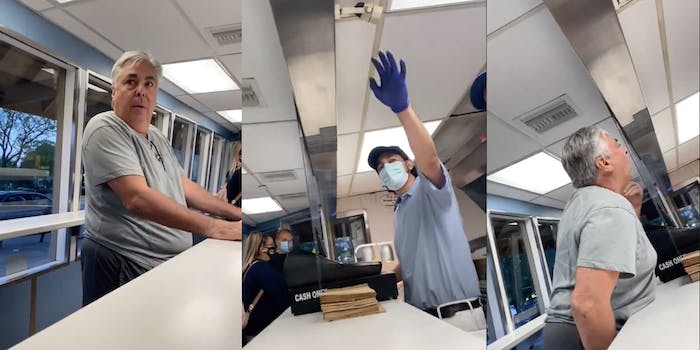 ‘F*ck you. Serve me’: Man gets denied at hot dog stand, resorts to racist attacks against workers

'I'm going to raise h*ll here for the rest of the night.'

An anti-mask man in Chicago went on a racist tirade in May after being denied service at a hot dog stand.

Video of the incident, which was uploaded to Facebook earlier this month but gained widespread attention on Friday, shows the man demanding to be served after refusing to cover his face.

“I could not believe the way this man was acting,” Correa wrote. “All because he refused to put his mask on and place his order.”

The man in question can be seen refusing to leave the business while demanding to be served.

After being refused service repeatedly, the man resorts to racist attacks on the businesses’ staff.

“You are all p*ssies,” the man shouts. “P*ssy Mexican mother f*ckers that work here. F*ck you!”

Although the man initially appears to leave, he returns just seconds later to continue the harassment.

Despite the racist comments, Correa says the store’s staff remained respectful throughout the entire incident.

“The employees were just doing their job,” Correa wrote. “They never lost their cool even after his racial profiling and disrespect.”

Still not finished, the man goes on to shout “serve me!” in the faces of employees over and over again.

“I’m going to raise hell here for the rest of the night,” the man says.

The man eventually storms out of the business while claiming that he intends to call the police for refusing him service.

Correa says the man began acting out even before he was able to start filming.

“Prior to this he also ripped the paper off the table that said you have to wear a mask,” he wrote. “America is so divided because of racist and ignorant people like this, with so much hatred in their hearts. I’m so sorry to the employees that had to take this kind of treatment for just doing their job.”

It remains unclear whether the man actually called the police.