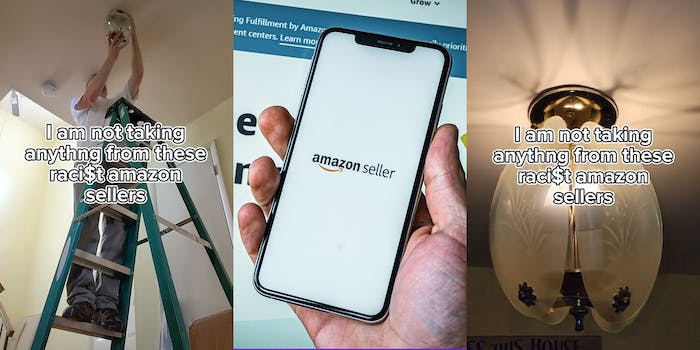 ‘I am not taking anything from these racist Amazon sellers’: TikToker says Amazon seller offered free products in exchange for a review—but only if it featured white kids

In a viral video, a TikToker calls out an Amazon seller who asked him to do a product review with the additional request that he featured white kids in it.

“I had to tell an Amazon seller to ‘F’ off, because my kids were not good enough to be in the video,” the creator says.

The TikToker (@mechanicallyincleyend) is well known on the platform, where he has about 1.9 million followers and posts videos about how to fix things. As of Sunday, his call out video received over 175,000 views.

@mechanicallyincleyend What would you have done? The light was from someone else #amazonfinds #handyman #storytime #viral ♬ Sneaky Snitch – Kevin MacLeod

In the video, the TikToker says Amazon sellers frequently send him free stuff in exchange for product reviews. He often does the reviews and makes a few thousand dollars per month doing them.

Usually, the exchanges simply involve a seller asking the TikToker if he wants to do the review, and the TikToker tells them yes or no. But one particular Amazon seller was trying to give out some kids toys and other household items, the TikToker says.

For the review of the kids toys, the seller said there was a “requirement” that the video feature a white dad, white daughter and white son.

“So I emailed him back ‘that’s very inappropriate, and my kids are mixed,'” the creator says in the video. “I’ve done over a hundred product reviews, and I’ve never run into this with anybody else.”

The seller told the TikToker to select some other products to review that wouldn’t have to involve white kids. However, the creator notes that he did not work with the Amazon seller.

“I am not taking anything from these racist Amazon sellers,” the video’s text overlay reads.

Viewers applauded the TikToker for standing up for his kids and refusing to do the review.

“Thank you for standing up and keeping yourself and your beautiful family first!” a second viewer commented.

A third said, “You’re a really good person with a great moral compass.”

One user had an idea of what the Amazon seller was trying to sell. “Was he selling sheets with holes cut out for the eyes?” they joked.

Other users called out the seller’s backward thinking.