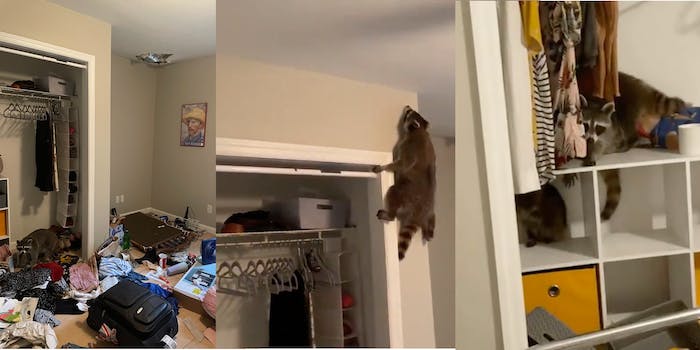 ‘They trashed my room’: Woman tweets encounter with raccoon that fell through her ceiling

Before long, at least four other raccoons arrived and stayed the night.

Haley Iliff came home from New York to find an unexpected visitor in her bedroom: a raccoon. Before long, at least four other raccoons arrived and stayed the night.

Iliff documented the experience on Twitter, where others were unfazed, sharing their own experiences with unexpected—and usually unwelcome—animal guests.

The raccoon apparently fell through the roof of Iliff’s home into her bedroom, although it’s unclear whether the raccoon created the hole itself.

Perhaps raccoon invasions aren’t particularly unusual, as Twitter user @snoofle replied, “Same energy as the time a raccoon broke out of my wall and got stuck.”

User @tellirico says they also found a raccoon at work, and user @HeyFromTexas tweeted that a raccoon came through their doggie door at night.

Iliff says the humane society couldn’t help remove the raccoon because it was a mother protecting her babies, and the family has to stick together.

According to Iliff, she and her roommate had to wait overnight for someone to come remove the animal. During that time, the guest count grew, reaching at least five raccoons.

“Since the roof is open to the sky, we have a multiplying raccoon problem,” Iliff tweeted.

The raccoons reportedly made their way into an upstairs office room. From the looks of Iliff’s tweets, they completely trashed her bedroom, scattering her belongings and using her bed as a toilet.

Luckily for Iliff though, her roommate rescued a treasured Squishmallow toy from “what would assuredly be a slow and torturous demise.”

Eventually, all the raccoons were removed from the premises, and according to Iliff, they now live on a private property with a lake.

Iliff did not respond to the Daily Dot’s request for comment.