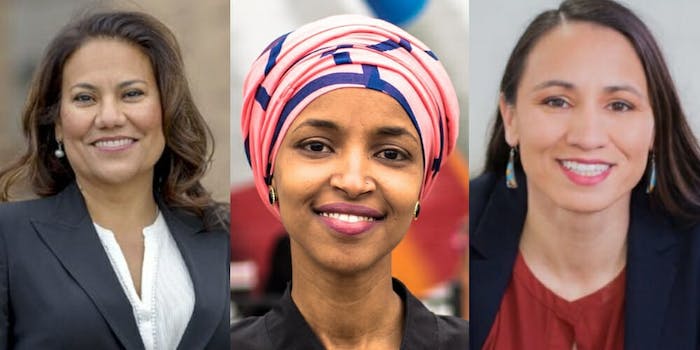 Great strides were made toward the America we want to see.

Judging by the way Democratic voters reacted online to the losses of Texas Senate hopeful Beto O’Rourke and Florida gubernatorial candidate Andrew Gillum, not to mention the impending loss of Georgia’s Stacey Abrams, it seems as if the 2018 midterms were less of a blue wave and more of a riptide dragging hopeful voters out to sea.

While it’s important to look at these campaigns with a critical eye to understand why they failed, it shouldn’t overshadow something remarkable: As of reporting time, at least 117 women will serve in the 116th Congress, a new record.

According to Rutgers University’s Center for American Women and Politics, the 2018 midterms saw more non-incumbent women elected to the U.S. House of Representatives than in any previous election. Of those women, 83 are Democrats and 12 are Republicans. Previously, women had been elected to a record number of House positions in 2016 with 85 seats—on Tuesday, a total of 95 were elected.

Among these wins were many historic firsts for women of color and queer candidates. In Kansas and New Mexico respectively, Democrats Sharice Davids and Deb Haaland have been elected as the first Native American women to serve in Congress. Davids, who is a lesbian, is also the first openly LGBTQ member of Congress to be elected from Kansas. Minnesota’s Ilhan Omar, elected to the state’s 5th congressional district, is the first Somali-American, and one of two the first Muslim women, to be elected to Congress.

Michigan’s Rashida Tlaib is also one of the country’s first Muslim women elected to office, as well as the first Palestinian-American, taking the seat vacated by Rep. John Conyers. Massachusetts’ Ayanna Pressley has become the state’s first Black congresswoman, and in Texas, Sylvia Garcia and Veronica Escobar became the state’s first-ever Latinas in the House from the state. Meanwhile, New York’s Alexandria Ocasio-Cortez has become the youngest woman ever to be elected to Congress.

In the U.S. Senate, 12 women were elected, bringing the total of female senators, including 10 holdovers, to 22 in 2019, 16 of them Democrats and six Republicans. In 2018, a record number of 23 female senators currently serve.

Several states also made the move to elect female governors. While Abrams is still waiting for every vote in Georgia to be counted, and refuses to concede until then, nine other women have been elected as their state’s governor, bringing the country back to its previous record highs of nine women in 2004 and 2007.

Other women and men also boosted their political representation this midterm election. Colorado elected Democratic Rep. Jared Polis for governor, making him the country’s first openly gay man elected to the position. According to Into’s Matthew Rodriguez, Florida’s Jennifer Webb will be the first openly queer women to serve in the state’s legislature, while Nebraska elected Megan Hunt as the first LGBTQ person to serve on state senate. Indiana also elected JD Ford as the state’s first openly gay state senator. Meanwhile, Antonio Delgado overcame a flurry of racist ads depicting him, a Black man, as a “big-city rapper” to become his district’s first nonwhite representative.

In 2018 election, a record number of women were running for office, with Democratic female candidates having the highest win rate of any gender and party group in the primaries—52.6 percent for the House, and 43.8 percent for House non-incumbents. Women in general also broke a record for gubernatorial primaries, scoring 16 total party nominations, nearly double the previous record of 10 nominations in 1994 and 2010.

Something is changing for female leaders, and more so for female political leaders of color. But focusing on major losses won’t help women keep this momentum; the proverbial “blue wave” isn’t so much a flash of strength as it is a gradual, painfully-slow restructuring of a system that’s prevented mass female political participation for decades, and continues to do so for so many queer women and women of color. But we can’t expect more change for women if we’re not investing our attention and efforts at those who are changing the political landscape in the first place.