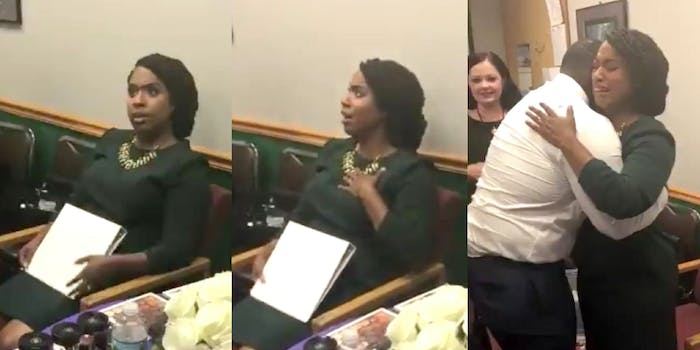 Pressley is on her way to becoming Massachusetts' first Black congresswoman.

With no Republicans running in Massachusetts’ 7th District and after beating out incumbent Rep. Michael E. Capuano in last night’s primary, Democratic candidate Ayanna Pressley is set to head to Congress—and be the first Black woman in the state to do so. Which can explain the overwhelming tears of joy she experienced after finding out she had won.

In a video shared Tuesday evening, Pressley, 44, is seen fanning her hand over her heart, then taking a stand and asking “We won? We won?” before breaking into tears, crying, “Oh, my God,” and hugging people around the room. The video has been viewed more than 600,000 times and has received more than 35,000 likes, accruing comments from viewers such as, “Why am I cryin’ like I won too?!!”

Capuano, who is 66, had first won the district seat in 1998 and is the second Democrat and fourth overall congressperson to lose a renomination this year, following Alexandria Ocasio-Cortez‘s unseating of Rep. Joseph Crowley for New York’s 14th congressional district in June.

On Twitter, Ocasio-Cortez congratulated Pressley, her “sister in service,” on her “historic path into Congress.” She had previously endorsed Pressley, who also ran on abolishing Immigration and Customs Enforcement (ICE), on single-payer health care, according to the Hill, and on prisoners’ voting rights.

Sharing a photo of herself and Pressley, she wrote that the two of them had bonded over running and being told its “not [their] turn,” that they weren’t “ready, good” enough, or “experienced” enough.

“We kept going anyway. In June, I won my primary. Tonight, she won hers,” Ocasio-Cortez wrote. “Here’s to November.”

“You saw what I saw: That these times demanded more from our leaders and our party,” Pressley told her supporters in Boston on Tuesday. “It’s not just good enough to see the Democrats back in power. It matters who those Democrats are.”