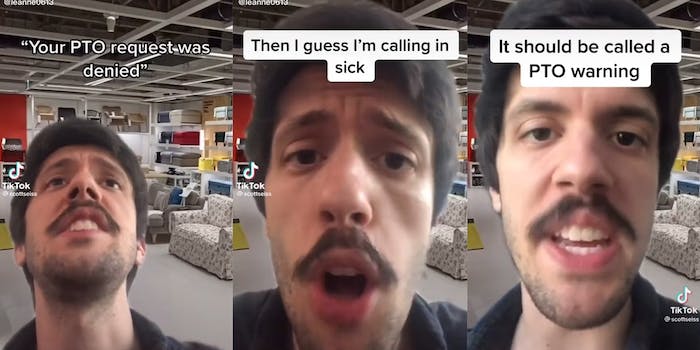 'PTO stands for prepare the others. I will not be there.'

If a paid time off request is denied, call in sick. That’s the advice given in a viral video from comedian Scott Seiss (@scottseiss) that recently went viral for a second time on TikTok after it was reposted by user Leanne Knox (@leanne0613).

This repost, which now has over 3.6 million views, features Leanne appearing briefly throughout the video and nodding in approval.

“‘You’re PTO request was denied,'” Seiss begins. “Then I guess I’m calling in sick. You didn’t think I had a backup plan? You just activated a trap card. I don’t even know why they call it a request. It should be called a PTO warning. ‘Cause the only thing you can do is prepare.”

The original video posted by Seiss currently has over 1.4 million views, with discussion sparking in the comments of both videos.

In the comments section, a majority of users agreed with the idea that paid time off is an employee’s to take and that an employer’s right to deny that request should be limited.

“Pto stands for prepare the others. I will not be there,” a commenter wrote.

“It wasn’t a request, I was letting you know I wasn’t gonna be here,” a user seconded.

“It gets me when the managers say I don’t have a replacement for you that day…Lol you are the replacement! Go and manage my absence,” a third added.

“This will fill me with rage forever,” another contributed. “Like you dont actually own me, if I’m not working on Tuesday thats the end of the story.”

Other commenters shared stories of managing their absences from work.

“I once came into a job after they told me I had no choice but to come in sick and I puked on my bosses desk [mid] conversation,” a user recalled. “No I’m not kidding.”

“I requested off, it was denied, so I called in sick. I was pulled in and warned I would be written up for insubordination,” another stated.

“I asked for a week off for a special family event. It got denied,” another remembered. “I quit the day before the event. Boss calls me saying to come back a week later.”

Others gave advice on how exactly to call out of work, either through PTO requests or through simply calling out sick.

“My time off requests always say ‘I’m not coming to work on ___.’ So like heads up lmao this is not a question,” a commenter shared.

“You don’t owe them an explanation either. Just simply say, I will not make it in today. That’s it. No reasons. No excuses. You tell them,” a TikToker suggested.

Some speculated that this contemporary move toward informing an employer of days off rather than requesting them represented a sea change in work culture in younger generations.

One user wrote, “The new generation appreciates their time more than the money and in this market. I don’t blame us. Most of these jobs don’t give a damn about us.”

The Daily Dot reached out to Seiss via Instagram direct message.