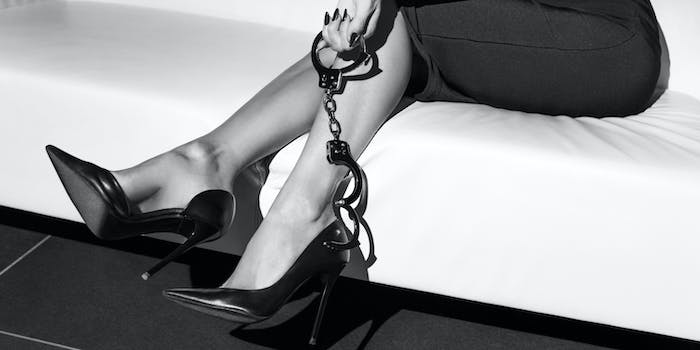 Facing social media crackdowns amid the pandemic, sex workers worry for their futures

Dominatrixes say regulations are cutting into income when they need it most.

It was “out of the blue,” she tells the Daily Dot, for German media regulators to start coming after the studio’s Twitter content. “This has never happened before.”

This concerns Mistress Bella and other Germany-based dominatrixes and sex workers for a number of reasons. For some, like Studio Avalon’s owners, it meant having to delete their entire Twitter accounts and start over. Not wanting to have to rebuild her 10,000-plus following, Mistress Bella says she deleted “basically all” of her tweets and kept her account.

Then there’s the issue of how vague and wide-reaching these regulations can be. One of Mistress Bella’s flagged posts was a retweet of a slave looking for work. “They told me I’m not allowed to retweet that because it’s a third-party offer,” she says. Another problem post showed Mistress Bella sitting on a slave, fully clothed.

And, of course, there’s the coronavirus pandemic, which has put many sex workers out of work in Germany through Oct. 24. Twitter regulations are cutting into Mistress Bella’s online income right when she needs it most. “It’s Mission Impossible trying to sell clips when you can’t promote them on Twitter,” she tweeted in July.

“If I’m not allowed to link to [my clips on Twitter],” she tells the Daily Dot, “it sort of makes making videos pointless.” The lack of this far-reaching promotion makes it harder to sell clips, and the investment Mistress Bella puts into making her videos gets little return in the form of new customers.

Though sex work has been legal in Germany since 1927, the 2002 Prostitution Act essentially recognized sex work as work, giving sex workers rights to health insurance and stating that sex work shouldn’t be considered “immoral.” Fetishes deemed taboo in the U.S. are explored regularly at certain German nightclubs, like Lab.Oratory’s scat night, where attendees can play with human excrement. “Seeing [Germany] go on the more conservative end of things was a little unsettling,” says An Li.

However, laws regulating online pornography have also been in place since 2002. The Interstate Treaty on the Protection of Minors in the Media makes it illegal to distribute pornography to which minors have access. Attorney Bodil Diederichsen, who works at Medienanstalt Hamburg/Schleswig-Holstein (MA HSH), a media regulatory body in northern Germany, and her colleagues use this treaty as the basis of their enforcement. They mainly work off tips, getting notifications from the public about possibly offending content, which also includes hate speech and other violations, before researching it themselves.

“If I use the same picture in an art context, it’s OK.”

“This is not sufficient according to our law,” says Diederichsen. “From my point of view, it makes the whole thing for young children even more interesting.”

“For dominatrixes, this means if I have a picture of somebody kneeling next to me, it’s a display of humiliating behavior that is very degenerating for youth to see, so that’s forbidden,” says Lady Velvet Steel. “If I use the same picture in an art context, it’s OK.”

Marko Dörre, a Berlin-based lawyer who represents adult industry clients, has put together a list of words he’s learned from experienced sex workers should not use online in order avoid getting flagged by media regulators.

Dörre says regulated Twitter content is not new for adult industry workers in Germany. “I have Twitter cases from 2013,” he wrote to the Daily Dot in an email. However, MA HSH put out a press release about “identifying freely accessible pornographic content on Twitter” in December. A representative from Medienanstalt Berlin-Brandenburg, the regulatory body that operates in Berlin, wrote to the Daily Dot, “It is possible that more warnings went out in March,” but says it wasn’t due to COVID-19. “The number of examined cases is connected to the number of complaints received by the MABB.”

In other words, the spate of warnings sent to Berlin-based dominatrixes in March likely came from one tip that led media regulators to similar content. Perhaps that’s why Mistress Bella’s studio got contacted, then the studio’s head mistress, then Mistress Bella herself, along with other dominant workers she knows.

Meanwhile, there’s an anti-sex work effort in Germany related to the coronavirus. In a letter signed by 16 members of parliament in May, German lawmakers from both the center-right and center-left parties called for sex work to be banned indefinitely. “It should be obvious that prostitutes could become epidemiological ‘super spreaders,’” the letter reads.

Both Lady Velvet Steel and Mistress Bella Lugosi feel dominatrixes are categorized as disproportionately risky. “The only other places still closed are nightclubs and saunas,” Lady Velvet Steel said in July. “We are not a mass event, like a disco… We are mostly one-to-one.” Many work on an appointment basis with known clients.

While Mistress Bella sees Germany’s Twitter enforcement as part of a “silent but organized attack on sex workers,” Lady Velvet Steel sees it as part of a wider trend.

“The world seems to be veering a little more conservative lately.”

These changes left Twitter as really the only remaining major mainstream social platform where sex workers could explicitly promote their work—hence German sex workers’ concern over regulations to the platform. While German officials can’t control the non-local Twitter, they are limiting its use for resident sex workers in a way that could serve as an example for other countries leaning toward increasingly conservative agendas.

Meanwhile, Mistress Bella had gone on welfare to support herself and her child while out of work, but on July 22, her boss tweeted that Studio Avalon was granted permission to reopen after presenting a “hygiene” plan. Sex work lives on in Germany, but not openly on Twitter.

“It’s unfair that we cannot celebrate and promote our video clips with little Twitter previews like our English and American colleagues,” Mistress Bella wrote in June, “but that’s the law. We need to get creative and promote in other ways.”