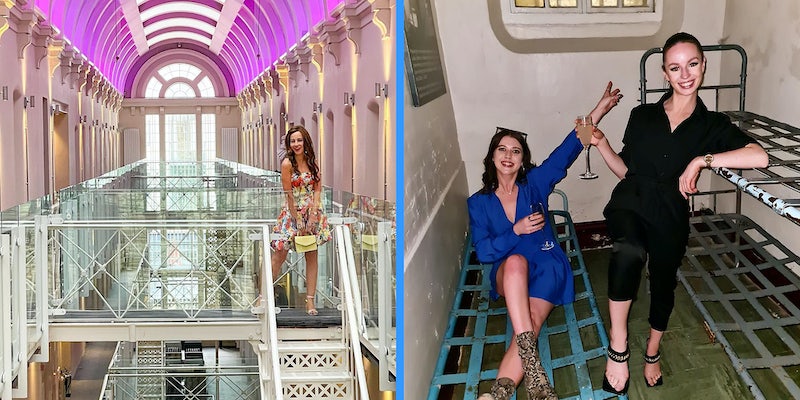 ‘This is extremely gross’: Instagrammers staying at former prison converted into luxury hotel get put on blast

'Just spent the night in prison and I loved it.'

People online are blasting a hotel that was converted from a former prison as well as the Instagrammers who are staying there.

A Twitter user, Anna Seregina (@touchingcheeses), brought the hotel to the attention of people online by posting several screenshots from Instagram. The screenshots show different Instagrammers posing while at the Malmaison Oxford hotel. Boutique hotels like Malmaison Oxford constructed in old prisons or asylum buildings capitalize on the trend of “dark tourism,” similar to “murder house” concepts.

According to the site for Malmaison Oxford, the hotel has “95 rooms and suites” that “were once your average basic cell.” “But they’ve done their time and are now reformed as luxurious locations to lay your head, thanks to super-fast Wi-Fi, super-comfy beds and powerful drench showers you’ll want to surrender to. These are simply the most stunning and original hotel rooms in Oxford, meaning they’re now on the most wanted list,” the description of the rooms reads.

“Just spent the night in prison and I loved it,” one of the Instagrammers’ captions reads.

“Prisoner for the night,” another reads.

“Most beautiful prison to get locked up in!” a third reads.

Seregina’s tweet, captioned “Found a prison that has been converted to an influencer hotel,” garnered over 8,100 likes and 585 retweets since being posted on Monday.

Seregina told the Daily Dot the hotel “makes (her) feel as though we live in hell.”

“It’s a shame Foucault isn’t alive to blog about it,” Seregina added.

Some commenters shared similar sentiments, comparing the hotel to plantation weddings and blaming capitalism for its creation. “One day, after prison abolition, we will view prisons the way we currently view plantations. And people will continue to do this for the same reason plantations become B&Bs and wedding locations,” user @theraegandavis said.

“TRULY LIVING IN A CAPITALIST HELL,” another said.

Others slammed the hotel guests for romanticizing prison.

Other replies point to other luxury buildings that were former institutions that exploited the most vulnerable of society. “They turned Danvers State Hospital, the influence for Arkham Asylum into luxury apartments. There are 700 unmarked, numbered graves on the grounds,” @Footballbat3 said.

Daily Dot reached out to Malmaison Oxford for comment.