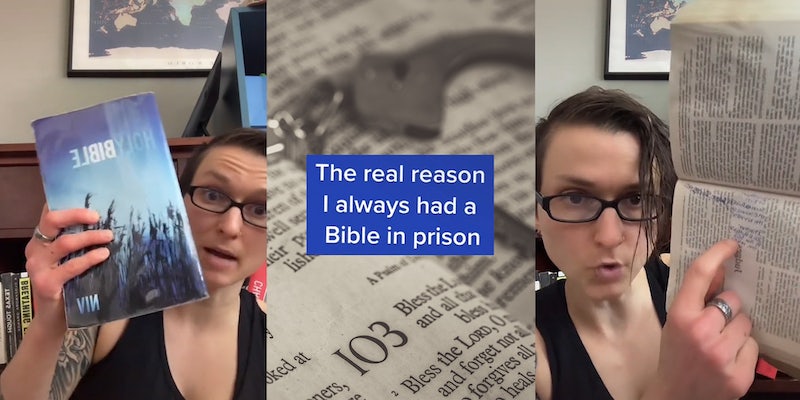 ‘That is such a bizarre & twisted rule’: TikToker shares why she brought a Bible to prison, even though she’s an atheist

'It seems like cutting people off from their support system is the absolute worst thing you could do.'

A TikToker, journalist, and atheist recently went viral after sharing a story about why she brought a Bible to prison—and it’s not for the reason one might expect.

According to user Keri (@keribla), rather than using the book for any sort of religious reason, her Bible had a far more practical purpose: addresses.

Keri explains why in the now-viral TikTok video, which currently has over 166,000 views.

“We all knew that when you got transferred from jail to prison, the only thing that you could bring with you was a religious book, and the only religious book that we had around that jail was Bibles,” she details in the video.

“The reason I needed it was to write down addresses,” she continues. “You couldn’t bring any addresses with you from jail to prison, and sometimes not from one jail to the other, so we all knew to write the addresses that were important to us in the margins.”

She then shows her own prison Bible, which, as she said, is filled with addresses hidden in the margins.

As for why she had to hide the addresses, Keri clarified in comments.

“if your bible was clearly being used to sneak in other info they would take it. Also If you had addresses of other inmates that could get a ticket,” she claims.

While policies seem inconsistent across states and jurisdictions, a few on the Internet have noted, anecdotally, that prisons will be more likely to accept a religious text than a simple address book.

Some commenters chimed in to share similar experiences and corroborate Keri’s story.

“Omg, I found my Bible in storage the other day,” one user wrote. “I did so many messages/calls for people when I got out.”

“We give what’s called transfer bibles to make sure people don’t do this,” a second claimed.

“Odd, but its the same in Marine boot camp,” another added. “I had a secret calendar to keep track of days, and I still have that bible.”

Others stated that they felt the rule of not being able to bring books or addresses into prison was needlessly severe.

“Wow, that is so cruel,” shared a commenter. “It seems like cutting people off from their support system is the absolute worst thing you could do.”

“That is such a bizarre & twisted rule they have,” agreed a second user. “Very wise to write them in the Bible & bring them that way, just f’ed that y’all had to!”

Curiously, this is not the only time Keri says she used religion to her advantage in prison, despite now being an atheist. In a later video, she details the unexpected reason she converted to Catholicism while locked up.

To summarize, she had a girlfriend in prison whom she was frequently unable to visit, as her girlfriend lived in a different dorm.

Keri’s girlfriend was Catholic, so she was allowed to attend religious services—and Keri quickly realized this was an easy way for the two to spend time with each other.

We’ve reached out to Keri for comment via email.

Update 11:01am CT, May 30: In an email to Daily Dot, Keri offered her thoughts on both the video and posting to TikTok.

“I write about prison a lot—literally just wrote a book about it—but I’ve been really surprised by what resonates on TikTok,” she explained. “So often, I find that TikTok viewers are interested in learning about these small snippets of jail and prison life, so I’ve made a lot of videos about prison slang, weird items that are banned and what it’s like having your period when you’re locked up. I didn’t realize this in particular would be of so much interest, though.”

“I noticed there were a few commenters that were offended that we wrote things in Bibles—but I think that kind of misses the point, in a way,” she continued. “We did that in order to be able to keep in touch with the family and friends who supported us in hard times, which I think is what organized religion does for a lot of people.”

Keri also clarified that incarcerated people are allowed to have books in prison; there are often issues bringing anything other than legal paperwork and religious texts from jail to prison.