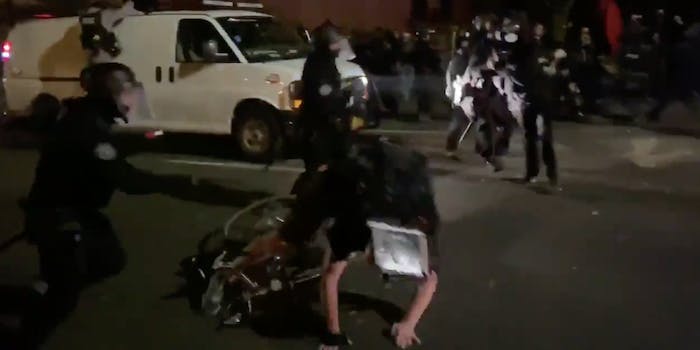 'I'm an Uber delivery driver,' he tries to tell police in the video.

An Uber delivery man was tackled to the ground by police in Oregon while trying to ride his bike through a protest.

The incident took place in Portland on Saturday evening, where demonstrators have continued to march since the police killing of George Floyd.

The man was captured on video attempting to ride down the street when officers suddenly knocked him over from behind.

The man can be seen falling to the ground, causing a customer’s meal to spill out onto the pavement.

Despite his attempts to reason with officers, the man is pinned down and hogtied on the street.

Police appeared to justify the arrest by stating that they gave “a warning to the crowd to get out of the street.”

It remains unclear whether the man was arrested or merely detained.

“Portland police are once again absolutely out of control,” @JoshuaPotash said.

“Portland Police are now gang tackling Uber delivery drivers trying to make a living during COVID because no leader in Oregon is stopping them,” @sethdunlap added.

Neither Uber or the Portland Police Department have publicly commented on the matter.